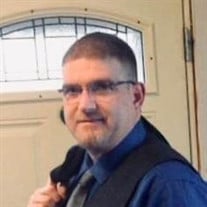 Jason Tibbetts died Wednesday, January 1, 2020 in Le Mars, IA. A memorial service will be 11:00 a.m. Thursday, January 9, 2020 at St. John Lutheran Church in Sioux City, IA with Reverend Jeff Swanson officiating. Visitation will be one hour prior at the church. Jason Eugene Tibbetts was born October 2, 1978 in Sioux City, IA the son of Daniel and Kathy (Blassl) Tibbetts. He attended school in the area and in 2017 he graduated with honors from Briar Cliff University obtaining a bachelor’s degree in Accounting. On November 2, 2010 Jason was united in marriage to Jeremy (Miller) Tibbetts. Jason was a Co-Owner of Accent Timbers located in Merrill, IA. He was also an accountant at Jebro Inc. in Sioux City, IA. Jason had obtained a WIT Accounting Specialist degree and graduated with honors. He was a VITA (Volunteer Income Tax Assistance) volunteer for several years and served as the Le Mars VITA site coordinator for a period of time. He was the WIT Accounting Club President as well as the WIT Accounting Student of the Year 2014. He served as an Accounting tutor at both Briar Cliff and WIT. Jason was a member of St. John Lutheran Church. Jason is survived by his father, Daniel (Jon) Tibbetts; brothers, Marcus (Tina) Tibbetts of Sioux City, Christopher Tibbetts of Sioux City; sister, Amanda Tibbetts of Stockton, MO; daughter, Samantha Tibbetts of Sioux City; niece, Brooklyn Sturgeon of Sioux City; nephews, Anthony Sturgeon of Sioux City, Tayler Tibbetts of Ponca, NE; special friends, Shawn Heartman, Ron and Rima Heartman. He is preceded in death by his husband, Jeremy Tibbetts and his mother Kathy Tibbetts.

The family of Jason Eugene Tibbetts created this Life Tributes page to make it easy to share your memories.

Send flowers to the Tibbetts family.