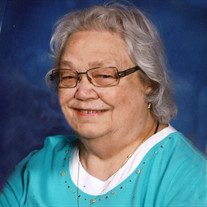 Janice L. (Olsen) Nagel, 90, of Sioux City, passed away Thursday, May 2, 2019, at Sunrise Retirement Community in Sioux City, with her family present. Service will be 10:30 a.m. Wednesday at Redeemer Lutheran Church. Burial will follow in Memorial Park Cemetery. Visitation will be 4 to 8 p.m. Tuesday, with a prayer service at 7 p.m., at the church. Arrangements are under the direction of Christy-Smith Funeral Homes, Morningside Chapel. Janice was born April 8, 1929, in Sioux City, to Oscar Carl and Marie (Keyser) Olson. She was united in marriage to Leo J. Olsen Jr. on Oct. 10, 1947. To this union, Janice and Leo had five sons, Donald, Randy, Terry, Roy, and Dennis. Leo passed away Aug. 28, 1968, in Kendallville, Ind. With four young sons, Janice returned to Iowa, where she raised the boys with the support of her parents. She was a loving mother and did her best to provide for her sons. Janice earned her GED after returning to Sioux City. She worked for Sioux City Schools, first in food service and later at East High with special needs students. She loved her job and finally retired at age 82. On June 27, 1987, she married Dwight "Buss" Nagel. They loved traveling and visiting family and friends. Buss passed away on March 14, 2005. Janice is survived by her sons and daughters-in-law, Donald (Jayne), Randy (Linda), Terry (Donelle), Roy (Melanie), and Dennis (Marsha); stepchildren, Judy Mayhew, Steve (Laurie) Nagel, Lori (Stephen) Lee; sister, Joyce Pottorff; 21 grandchildren; 38 great-grandchildren; nieces and nephews; and many other relatives and friends. She was preceded in death by her parents; her husbands; brother-in-law, Keith Pottorff; brother, John "Jack" Olson; stepson, Mike Nagel; stepson-in-law, Mike Mayhew; and sister-in-law, Lorraine Olson. The family has requested that memorials be directed to the Special Olympics or Camp High Hopes.

The family of Janice Louise Nagel created this Life Tributes page to make it easy to share your memories.

Send flowers to the Nagel family.