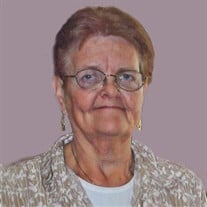 Janice C. Collins, 79, of Sioux City, peacefully passed Wednesday, May 15, 2019, at a Sioux City hospital. Memorial services will be 10:30 a.m. Thursday at Larkin Chapel, Christy-Smith Funeral Homes, 2320 Outer Drive N. Visitation will be 9:30 a.m. until service time Thursday at the funeral home. Janice Carol Burg, the daughter of Kenneth and Bonnie (Bell) Burg, was born on April 17, 1940, in Sioux City. She graduated from East High School. On March 23, 1959, Janice was united in marriage with Jerry Collins in Sioux City. She was his beloved wife and only true love for 60 years. Janice worked for MCI, was a bus aide for the school system, worked at Sioux Bee Honey, and Premier Bank. She was also a devoted housewife and mother. Janice enjoyed fishing, camping, and popsicles, but her greatest love was family. Janice is survived by her husband, Jerry; children, Christine (Joe) Casillas, Marjorie (Tim) Morrison, Gregory Collins, Kenneth Collins, and Curtis (Tanya) Collins; 15 grandchildren; 19 and a half great-grandchildren; brothers, Robert Burg and Duane Burg; brother-in-law, Richard Collins; sister-in-law, Betty Zierke; her dog, Daisy; and many other relatives and friends. She was preceded in death by her parents; Jerry's parents, Ila and Walter Collins; and her dog, Princess.

The family of Janice C. Collins created this Life Tributes page to make it easy to share your memories.

Send flowers to the Collins family.