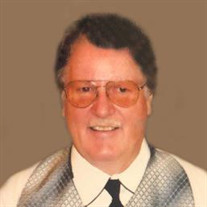 James Eugene Tadlock, age 75, of Sioux City died unexpectedly on Tuesday July 30, 2019 at a local hospital. Funeral services will be held at 10:00am Friday August 2, 2019 at Mater Dai Immaculate Conception Center in Sioux City with Father Daniel Rupp officiating. Mr. Tadlock will be cremated following the service and a private family burial will be held at a later date. Visitation will be held on Thursday from 4:00-8:00pm with the family present 6:00-8:00pm and a Parish Vigil Service held at 7:00pm at Morningside Chapel Christy Smith Funeral Homes. Jim was born in Sioux City, Iowa on January 7, 1944 the son of Melvin and Mary Tadlock. He came with his family to Sioux City as a small child and attended Immaculate Conception Grade School and Bishop Heelan High School graduating with the class of 1962. After high school Jim attended Iowa State University, graduating with a Bachelor of Arts degree. He then went on to receive a Master’s degree from Drake University. He was united in marriage with Judy Ann Zebus on September 5, 1966 in Sioux City. He served during the Vietnam War as a member of the United States Army Reserves. Jim worked at Ginsberg and Lansburg brokerage for a few years before purchasing the company and he continued to operate the business until his retirement in 2001. He was a member of The Church of the Nativity. He was an avid fan of Iowa State University Athletics, and was a huge fan of college football and basketball. Jim enjoyed reading, working in his garden, growing his tomatoes, and spending time with his family he loved deeply. Jim is survived by his wife of 52 years Judy of Sioux City, his children: Jennifer Tadlock of Springfield, MO., James Tadlock of Yankton, SD., Jessica Masselink and her husband Tim of Sioux Falls, SD. and Jonathan Tadlock of Sioux City. He is also survived by his four grandchildren Morgan, Emma, Tyler, and Julia. He is also survived by siblings Suzie Tadlock, Denise Hunter, Beckie Hesse, Julie Happe, Andy Tadlock, Chris Tadlock and Dan Tadlock. He was preceded in death by his parents, one brother and one sister. In lieu of flowers Jim’s family asks that memorials in his name be made to Lincoln’s Legacy https://www.ifopa.org/lincoln_s_legacy or mailed to Lincoln’s Legacy Memorial 4100 Morningside Ave. Sioux City, IA 51106

The family of James Eugene Tadlock created this Life Tributes page to make it easy to share your memories.

Send flowers to the Tadlock family.