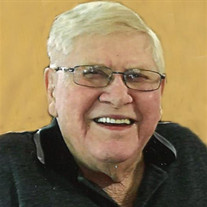 The Rev. James A. "Jim" Sandvik, 89, of Sioux City, died Saturday, April 20, 2019, at Countryside Senior Living in Sioux City. Memorial services will be 11 a.m. Thursday at St. John Lutheran Church in rural Akron, Iowa. Visitation will be 5 to 7 p.m. Wednesday, with a prayer service at 7 p.m., at the church. Arrangements are under the direction of Morningside Chapel, Christy-Smith Funeral Homes. James Allen "Jim" Sandvik, the son of Ingvold and Hilda (Eidsness) Sandvik, was born on Sept. 3, 1929, in Rockford, Ill. He graduated from high school in Henry, S.D. in 1947. He farmed and also worked for the railroad. On June 14, 1948, Jim was united in marriage with Lois Fugle in Henry. In 1960, the family moved to Minneapolis. Jim went to seminary during the day, and worked at the local Ford dealership in the service department. Jim was ordained in 1965, and took his first call to Bethlehem Lutheran Church in Morris, Ill. He went on to serve St. John Lutheran Church near Akron, and then Riverside Lutheran Church in Sioux City in 1981. Jim's final parish was Grace Lutheran in Hanlontown, Iowa, retiring in 1993. In 1994, Jim was united in marriage with Suzanne Jennings in Wichita, Kan. The couple also lived and traveled the country in their fifth-wheel camper for many years. Suzanne died on April 27, 2013. Jim enjoyed operating his ham radio, raising horses, and cruising on his motorcycle. Jim is survived by his children, Cheryl (Carl) Thaemert of Denver, Colo., Arlan (Luanne) Sandvik of Nipomo, Calif., and Jamie Zimmerman of Sioux City; seven grandchildren; seven great-grandchildren; and many other relatives and friends. Jim was preceded in death by his parents; Lois; a great-granddaughter, Hailee; and Suzanne. The family has requested that memorials be designated to St. John Lutheran Church.

The family of James Sandvik created this Life Tributes page to make it easy to share your memories.

Send flowers to the Sandvik family.