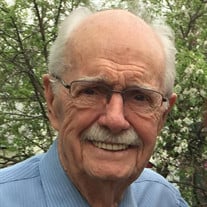 James Floyd “Mac” McMartin Jr., age 96, of Sioux City died Monday February 28, 2022 at a Sioux City Hospital. Funeral services will be held at 11:00am Saturday March 5, 2022 at Christy Smith Morningside Chapel, 1801 Morningside Ave. with burial following in Memorial Park Cemetery. Visitation will be held one hour prior to the service on Saturday at the chapel. James was born on February 20, 1926 in Paris, Illinois, the son of James Floyd Sr. and Ruth E. (Everett) McMartin. He came with his family to Sioux City in 1931 and resided here the remainder of his life. James served his country as a member of the United States Army Air Corps during World War II, after his service he attended and graduated from Morningside College. He was united in marriage with Joyce E. Smith on March 7, 1947 at First United Methodist Church. Joyce preceded him in death on July 8, 2019 in Sioux City. James served as a teacher in the Sioux City Community Schools for 32 years. He established the student vocational carpentry program which was the first in the state of Iowa. His students built and sold 8 homes in the Sioux City area under his leadership and guidance. He was a current member of Grace United Methodist Church, and a 50 plus year member of Landmark Masonic Lodge. James enjoyed golfing, dancing, traveling, and attending many events in the Sioux City area, as well as spending time with his family. He is survived by his son James McMartin III (Mary) of the Woodlands, Texas, his three daughters Marcelene Saylor of Ozark, Missouri, Susan Krage (Tom) of Westminster, Colorado, and Karen Standage (Jim) of Sioux City. He is also survived by his 9 grandchildren and 18 great-grandchildren. Along with other relatives and friends. Jim was preceded in death by his parents, and his son-in-law Dr. Robert Saylor. In lieu of flowers Memorials may be made to the family for a fitting memorial in his name. Jim’s hammer has gone silent

The family of James F. McMartin Jr created this Life Tributes page to make it easy to share your memories.

Send flowers to the McMartin family.