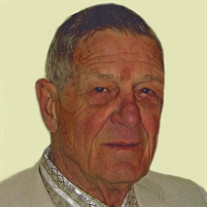 James R. Lubsen, D.V.M., 82, of Sioux City, passed away Monday, June 25, 2018, at a local hospital following a short illness. Services are planned for 10:30a.m. Saturday, July 7, 2018, at Morningside Lutheran Church with Pastor Paul Andell officiating. Visitation will be one hour prior to the service at the church. Burial will be at Memorial Park Cemetery. Online condolences can be left for the family at www.christysmith.com Jim Lubsen, also known affectionately as Doc by his family and many friends, was born July 1, 1935, son of Joseph and Dorothy Lubsen, in Sioux City. After graduating from East High School in 1953, Jim enrolled at Iowa State University. Based on his love of animals, Jim earned a degree in veterinary medicine in 1959. He married Jeannette Moss on June 27, 1958, in Sioux City. After graduation from Iowa State, he and Jeannette returned to live in Sioux City where he began a long-time career in veterinary practice at the Sioux City Stockyards. They lived on an acreage for many years where the family boarded horses and he could spend time outdoors. He retired when the Stockyards closed in 2002. Jim was a member of Morningside Lutheran Church, Abu Bekr Shrine Temple, Abu Bekr White Horse Mounted Patrol. Iowa Veterinary Medical Association, American Veterinary Medical Association, Interstate Veterinary Medical Association. Jim loved boating on the Missouri River, playing cards with friends and family, raising numerous dogs, and golfing at the Morningside Country Club, Sioux City Boat Club and Green Valley Golf Course where he was a long-time member with his golfing friends as part of the “The List.” Jim is survived by his wife, Jeannette of Sioux City; two daughters; Judy (Mark) Reinders of Sergeant Bluff, Jana (Jeff) Hanson of Sioux Falls, SD and son Jeff (Josh & Dustin) of Independence, MO, grandchildren; Cara Wood and Josh (Hanna) Reinders of Sioux City, Erin Reinders of Moville and Alex and Ben Hanson of Sioux Falls, SD, great-grandchildren; Lauren and Nolan; and numerous other in-laws, nieces and nephews. He was preceded in death by his parents and three sisters, Joann Lubsen, LaVonne Leopold and Janice Holbrook, and nephew, Keith Leopold. Jim was an extremely caring man, especially in terms of taking care of his family. Memorials may be directed to the Siouxland Humane Society or Stars Inc.

The family of James Robert Lubsen created this Life Tributes page to make it easy to share your memories.

Send flowers to the Lubsen family.