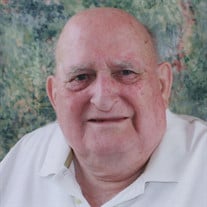 James “Jim” Harrison Foster, 88, formerly of Sioux City, IA passed away Wednesday, August 8, 2018, at CHI Health Missouri Valley Hospital in Missouri Valley, IA. Jim was a resident of Longview Care Center for 1½ years, previously in Embassy Care Center of Sergeant Bluff, IA. A funeral service will be 1:00 pm Monday, August 13, 2018, at Community of Christ Church at 3232 Transit Ave in Sioux City, IA with luncheon to follow. A visitation and viewing will be one hour prior to services. James “Jim” Harrison Foster, the son of Thomas and Florence (Evans) Foster was born on August 6th, 1930 in Sioux City, IA. He graduated from Sioux City East High School in 1948. He worked for Johnson Biscuit Company as a Sheeter Feeder from 1949-1951. Jim later enlisted in the U.S. Army and served honorably in the Korean War. He was wounded in action in Korea and received a Purple Heart (United Nations Service Medal), two Bronze Service stars, and a Combat Infantry Badge, all presented on January 23, 1952. He returned to Johnson Biscuit (later became Interbake Foods located in North Sioux City, SD) upon discharge from the Army and worked for the company for over 40 years. After retirement, Jim worked at Sam’s Club in Sergeant Bluff, IA as a food demonstrator. Jim was a sports enthusiast, especially for the New York Yankees, Iowa Hawkeyes, and the Kansas City Royals (when they are not playing the Yankees). On June 26, 1953, Jim married the love of his life, Ardys Joan Stivers in Sioux City, IA. Ardys was an artist and was involved with many art shows. She belonged to the Very Special Arts, where they traveled all over the United States showing off her artwork. Jim was proud of her artwork and would help out with transportation, setup, and whatever other jobs Ardys required assistance with. They resided in Sioux City, IA until Ardys passed away May 25, 2011. Jim and Ardys were active in the Community of Christ Church for many years. In their later years, they attended Glad Tidings Lighthouse in South Sioux City, NE. Jim was a member of the Sioux City Teamsters, the Moose Lodge (Sergeant Bluff, IA), and bowled on multiple men’s leagues where he served as the league secretary. Jim was preceded in death by his parents; wife, Ardys; two sisters; and one brother. Jim is survived by a son, Kim (Sharon) Foster of Omaha, NE; a daughter, Joni (Jay) Foster-McFee of Omaha, NE; three grandchildren, Robert Foster, Andrew Foster, and BriAnn Christensen; nieces and nephews; extended family, Brian Christensen, Carolyn Probasco, Lisa Rose, and Chelsea Thiering; and many other friends and relatives.

The family of James H. "Jim" Foster created this Life Tributes page to make it easy to share your memories.

Send flowers to the Foster family.