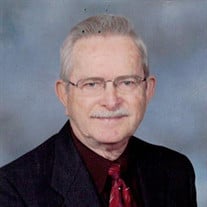 Dr. Irving Edward “Doc” Molstad passed away May 26, 2022, following complications from dementia. A funeral service will be 10:30 am Wednesday, June 1, 2022, at Grace United Methodist Church, with visitation one hour prior. Burial will follow in Memorial Park Cemetery. Online condolences may be expressed to the family at www.christysmith.com. He was born February 1, 1926, the third of five children of Addie (Onstot) & Alfred Molstad in Moville, Iowa. He was raised on a farm near Moville & graduated from Moville High School. Following graduation, he entered the Army and served as a Sergeant in the medical corps during WW II in Europe until the end of the war. Following the war, Irving and his brother, Lloyd, attended & graduated from Palmer College of Chiropractic in Davenport. After graduation, they continued their education at Northwestern College of Chiropractic in Minnesota and earned a second degree. Irving’s first practice was in Cherokee, IA, but he soon moved to Sioux City and he practiced with Lloyd. They practiced together until Lloyd’s death in 1985. He continued to practice alone until 1995 when his son, Tom, began practice with him. Irving practiced until his retirement in 2019 after 70 years. Irving married R. Regina Wilson on Valentine’s Day 1959. They had a son, Tom, in 1962 and a daughter Susan, in 1964. Irving was active in the Abu Bekr Shrine, the Scottish Rite, Grace United Methodist Church, Boy Scout Troop 280, the VFW, American Legion, and the Morningside Kiwanis Club. Irving and Gina loved to travel. They took their family on vacations around the U.S. as the kids were growing up and continued to visit all 50 states, as well as twelve other countries around the world. Irving also enjoyed his time as an assistant Scoutmaster, hiking at Philmont Scout Ranch in New Mexico twice & white water rafting down the Arkansas River in Colorado with his son and members of the troop. In 1982, Irving & Gina helped chaperone their daughter, Susan, and the East High School Marching Band on their trip to Washington, DC and New York. For twenty years, he traveled with friends to Canada for fishing trips. He was one of the first WW II Veterans to participate in the Honor Flight to Washington, DC and remarked that “it was one of the best days of my life!” In 2016, Irving and Gina were Parade Marshalls for the Morningside Days Parade. Irving was a farmer at heart. Nearly half of the back yard was used for his garden where they grew beans, beets, cucumbers, zucchini, and black raspberries – which he used to make his wine. (The family wishes we had a bottle left to raise a toast to him.) He loved planting flowers at his office and his home. In later years, he preferred reading Western books to watching TV. He loved spending time with his grandson, Brian, and watching him play baseball. He is survived by his wife, Gina; son, Dr. Tom Molstad of Sioux City; daughter, Susan (Steve) Schmiedt of Waukee, IA; grandson, Brian (fiancée Kacy Leuck -Ankeny); and several nieces and nephews. He was preceded in death by his parents; brothers, Wayne, Howard, Lloyd, and their wives; and sister, Mary Smith and her husband. Memorials may be made to Grace United Methodist Church.

The family of Irving Edward Molstad created this Life Tributes page to make it easy to share your memories.

Send flowers to the Molstad family.