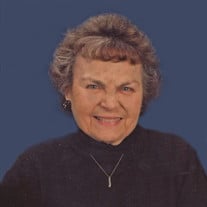 Ione Beryl Morgan, age 92, of Sioux City died Thursday March 19, 2020 at Unity Point St. Luke’s Medical Center in Sioux City. There will be no public services or visitation held at this time. Christy Smith Morningside Chapel is assisting the family. Ione was born on December 2, 1927 in Sioux City, IA. She attended East High School and graduated as Salutatorian of her class. She then attended Morningside College where she served as Homecoming Queen in 1948. She was united in marriage with Richard A Morgan on December 23, 1950 at Rustin Avenue United Methodist Church. Richard preceded her in death on March 13, 2020 in Sioux City. She was a lifelong resident of Sioux City. She taught school at Crescent Park, and Whittier until she became a mother and a grandmother, which she was a passionate full time caregiver to both. She was a member of Faith United Presbyterian Church, where she served as a deacon, elder, Sunday school teacher and was in a circle bible study group. She was also a member of Order of the Eastern Star, D.A.R., Girl Scout Leader, bridge club, and enjoyed bowling in a league. She loved all children and animals. She is survived by her daughters: Becky DeKruif (Michael) of Waterloo, IA., Amy Morgan of Ponte Verdra Beach, FL., and Kerry Wenzel of Sioux City. Her son: Richard “Skip” Morgan Jr (Laura) of Sioux City, and adopted grandson Richard “Trey” Morgan (Lexi), her 7 grandchildren and 15 great grandchildren. She was preceded in death by her parents, her husband, 2 brothers, and her son Danny. The family requests memorials be made to St. Jude’s Children’s Hospital.

The family of Ione Beryl Morgan created this Life Tributes page to make it easy to share your memories.

Send flowers to the Morgan family.