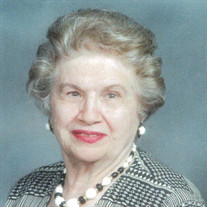 Helen Jean Salem, 95, passed away unexpectedly Thursday, August 6, 2020, at her residence in Sioux City, IA. A visitation will be from 9:00 a.m. to 10:30 a.m., Tuesday, August 11, 2020, at Mater Dei Parish-Immaculate Conception Catholic Church. Mass of Christian Burial will follow at 10:30 a.m. Due to the danger of Covid 19, the family will require that attendees wear a mask. Helen Jean, the daughter of David and Rose Sabag, was born November 24, 1924, in Sioux City, IA. She graduated from East High School in 1942 and went on to earn an Accounting Certification from the National Business School. On April 12, 1946, Helen Jean was united in marriage with Elias Salem in Sioux City. (Eli died in 1990.) Helen Jean was employed in accounting at the Myer Shubb accounting firm for 25 years and then several other businesses including Carnation Foods and the Sioux City Country Club Pro Shop. Her most prized job was being a mother to her four children and a Sithee to her grandchildren and great grandchildren. She describes these children as the “lights and loves of her life”. Helen Jean was a member of Immaculate Conception Catholic Church where she once was the Treasurer of the Altar Society and a volunteer at the Soup Kitchen. She was a Scout Leader and enjoyed frequenting the “Poker 500 Casino”. Helen Jean also loved Bingo, playing cards, cooking, baking and watching golf on TV. Helen Jean is survived by her children, Mary Jo (Spero Vlahoulis) Salem of Sioux City, Gayle Salem of Sioux City, Mark (Laurel) Salem of Des Moines, Barb (Tim) Shea of Springfield, IL; seven grandchildren, Brianna (Bryan) Cless, Jessica (Blake) Beekmann, Alex and Anne Salem, Jake Shea, and Emma and Kellen Vlahoulis; four great-grandchildren, Ava and Ella Cless, Braxton and Brinkley Beekmann; siblings, Phyllis Rashid of Sioux City, Dave (Judy) Sabag of McCook Lake, SD, Betty Lou Sundseth of Golden, Co; and many other relatives and friends. She was preceded in death by her parents; husband; a son, Joey Salem; and two brothers, Phil and Joey Sabag. In lieu of flowers, the family has requested that memorials be directed to Immaculate Conception Church.

The family of Helen Jean Salem created this Life Tributes page to make it easy to share your memories.

Send flowers to the Salem family.