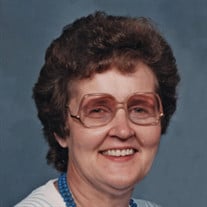 Helen F. Belt of Sioux City passed away May 16, 2021 at a local care facility. A funeral service will be 11:00 am, Friday, May 28, 2021, at Christy-Smith Funeral Homes, Morningside Chapel, 1801 Morningside Ave., with visitation one hour prior. Burial will be in Calvary Cemetery immediately following the service. Condolences may be left for the family at www.christysmith.com. Helen was born December 21, 1931 in Sioux City to Peter and Rose (Mogenis) Laskovsky. She attended schools in Sioux City, graduating from Heelan in 1950. She married Wesley Rinker and the marriage was later dissolved. On April 27, 1963, she married Earl L. Belt in South Sioux City, NE. Helen’s working career included Western Union, Swift & Co., IBP and Tyson Foods, retiring in 2012. In her spare time she was a volunteer for the Center of Siouxland for many years and she was also an avid Bingo player and loved to read. Helen is survived by her daughter, Elizabeth of Almo, KY (Dany Echagueh of Tarragana, Spain); son, Christopher (Glen McNeill) of Aurora, CO; special friend, Colleen Moore of Albuquerque, NM; brother, Paul Laskovsky of Phoenix, AZ; sister, Rosalie (J.) Lemanski of Sandy, UT; sister-in-law, Martha Pape of Loveland, CO; brother-in-law, William (Lou) Belt of Layton, Utah; and numerous nieces, nephews, and cousins. Helen was preceded in death by her husband, Earl; daughter, Cathy Rinker; parents; step-father, John Razanskas; and brother, John Razanskas, Jr. In lieu of flowers, please make a donation to an organization of your choice.

Helen F. Belt of Sioux City passed away May 16, 2021 at a local care facility. A funeral service will be 11:00 am, Friday, May 28, 2021, at Christy-Smith Funeral Homes, Morningside Chapel, 1801 Morningside Ave., with visitation one... View Obituary & Service Information

The family of Helen F. Belt created this Life Tributes page to make it easy to share your memories.

Send flowers to the Belt family.