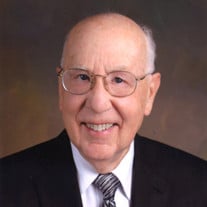 Harland D. Johnson, 89, of Sioux City, died Friday, Nov. 1, 2019, in Sioux City. Service will be 10:30 a.m. Tuesday at Redeemer Lutheran Church, 3204 South Lakeport, Sioux City, with Pastors Russell Senstad and David Zirpel officiating. Interment will be in Graceland Park Cemetery, Sioux City. Visitation will be 4 to 8 p.m. Monday, with the family present 5:30 to 8 p.m., and a prayer service at 7 p.m., at the church. Online condolences may be made to the family at www.christysmith.com. Harland was born March 23, 1930, in Sioux City, Iowa, to David and Hilda (Hedlund) Johnson. He attended Sioux City Public Schools, graduating from East High School in 1948. He continued his education at Augustana College in Rock Island, Ill., graduating in 1952 with a bachelor’s degree. Harland then attended Augustana Theological Seminary in Rock Island. He entered the U.S. Army and served during the Korean Conflict from 1953 to 1955. Harland married Jeannette Pearson on July 11, 1954, in Galesburg, Ill. After being honorably discharged from the Army, Harland and Jeannette returned to Sioux City. From 1955 until 1997, he owned and operated Johnson Hardware, Inc. Harland belonged to the Sioux City Business Leaders Club, served as a board member of First Federal Savings and Loan, and was past President of the Iowa Retail Hardware Association. He also served on the board of the Sioux City Rotary Club, as chair of the Swedish Vasa Lodge, as well as on the Siouxland Youth Symphony Board, Sioux City Chamber Music Board, and the Salvation Army Advisory Board. He also participated in the Hispanic Outreach in Siouxland and the YMCA Indian Guides/Princesses. Harland was a past member of Augustana Lutheran Church, where he served as a Deacon and Sunday school teacher. He was a member of Redeemer Lutheran Church in Sioux City, where he served as an Elder, Sunday school teacher, Youth board member, and as a member of the Evangelism Board. Survivors include his wife, Jeannette of Sioux City; four children, Lynnette Schroeder (Dana) of Chicago, Ill., Sylvia Johnson of Sioux City, Bruce Johnson (Janine) of Byron Center, Mich., and Yvonne Johnson (Lizhou Liu) of Savannah, Ga.; and nine grandchildren, Christopher, Emily, Joshua, Julia, Teagan, Sheyda, Beiwen, Olivia and Oskar. He was preceded in death by his parents, David and Hilda (Hedlund) Johnson; and his sister, Audrey Wilson. In lieu of flowers, the family suggests memorials to Redeemer Lutheran Church, Salvation Army of Siouxland or the Mayo Clinic Foundation.

The family of Harland D. Johnson created this Life Tributes page to make it easy to share your memories.