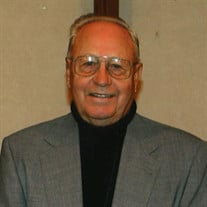 Gordon was born on July 19, 1922, in Linn Grove, Iowa on a farm to Tennis and Amy (Hansen) Mickelson, he was the sixth of seven children. He passed away on December 11, 2019 under the loving care of his family and care givers at the Pioneer Valley Living and Rehab and Hospice Care Initiatives in Sergeant Bluff. A Celebration of Life will be scheduled for a later date. After high school, Gordon joined the Navy and served as a fireman on the destroyer tender USS Dixie in the Pacific during WWII. After the war, he returned home and traveled to Illinois to work for Rockford Bolt. He moved to Iowa and married Frieda Heinse and together they had four children Martha, Allen, Paul and David. They raised their children on a farm near Anthon, Iowa. After retiring from farming, he did maintenance with the Spirit Lake School District, Iowa State University, and Gateway. He was loved by people who worked with him as he always had fun wherever he went. He was especially proud to work at Gateway as they grew from their Sergeant Bluff location to North Sioux City and became the first employee to retire from Gateway. He was proud of his kids, grandkids and many nieces and nephews. He enjoyed golfing at Floyd Golf Course in Sioux City and playing many golf courses with his sons Allen and Dave. Watching golf and football kept him busy when he wasn’t playing while also enjoying his ‘glass’ of wine. He golfed and walked five miles a day until he was 94. He moved in with Allen and Pam Mickelson and lived with them in Sergeant Bluff until he moved to Pioneer Valley Living and Rehab in Sergeant Bluff. He was preceded in death by his parents Amy and Tennis, sisters, Bernice Steffen, Ruth Wischmeyer, and Norma Culp, brothers Donald, Nolan and Richard Mickelson, and daughter Martha (1980). He is survived by his three sons and their families, Allen and his wife Pam Mickelson of Sergeant Bluff, IA, Paul Mickelson of Gulfport, MS, and David and his wife Barb Mickelson of Hot Springs, AR, grandchildren John Mickelson and Martha Mickelson of Seattle, WA, Matthew and his wife Elissa Mickelson of Sioux City and son Nicholas, Terra Mickelson of Sioux City, IA, Kimberly and her husband Justin Werner and their son Logan of Denver, CO. He is also survived by many nieces and nephews and their families that he dearly loved. Memorials can be made to honor the mission of St. Mark’s Lutheran Church.

Gordon was born on July 19, 1922, in Linn Grove, Iowa on a farm to Tennis and Amy (Hansen) Mickelson, he was the sixth of seven children. He passed away on December 11, 2019 under the loving care of his family and care givers at the Pioneer... View Obituary & Service Information

The family of Gordon A. Mickelson created this Life Tributes page to make it easy to share your memories.

Send flowers to the Mickelson family.