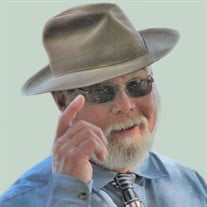 Gordon Gene Halfrich, 69, passed away peacefully in his home on the evening of August 3, 2020, in Sioux City, IA. A funeral service will be 10:30 am Monday, August 10, 2020, at Christy-Smith Funeral Homes, Morningside Chapel, 1801 Morningside Ave., with visitation one hour prior. Burial will be in Memorial Park Cemetery. Gordon was born December 11, 1950, to Gene and Betty Halfrich in Sioux City. Everyone who knew anything about Gordon knew that he was a fighter in every regard, including his long battle with cancer since 2014, up until his passing. Gordon married his high school sweetheart, Linda J. Borcherding on August 8, 1970. He always believed if you weren’t living life on the edge then you were taking up too much space. During his amazing and boisterous life, he has been a carpenter, over-the road-truck driver, and a machinist, finally retiring from Rock Tenn in 2013, which he lovingly referred to as “The Hot Box”. Gordon lived life to the fullest by filling it with family, friends, and hobbies. He loved being outside hunting birds with his dog, shooting at the range, boating with his family (being a River Rat), traveling, going to The Sioux City Musketeer hockey games, and his latest obsession, building and crawling RC cars. Gordon is survived by his wife, Linda; his daughters, Carrie-An (Doug) Price, Michelle (Jason) Berg; his son, Bryan (Stormi) Halfrich; his grandchildren, Ashley (Kevin) Bradbury, Priscilla (Tyler) Price, Chaeli (Cheto) Dawdy, Dustin Price, Jocelyn (Dalvin) Berg, Sydney (Tristen) Berg, Grayson Halfrich; eight great-grandchildren; a brother, Bill (Vicki) Halfrich; and his Louie. He is preceded in death by an infant son, Gordon Jr. and his parents. Special thanks to the doctors and employees at the June E. Nylen Cancer Center in Sioux City. In lieu of flowers, the family has requested memorials be directed to the June E. Nylen Cancer Center.

Gordon Gene Halfrich, 69, passed away peacefully in his home on the evening of August 3, 2020, in Sioux City, IA. A funeral service will be 10:30 am Monday, August 10, 2020, at Christy-Smith Funeral Homes, Morningside Chapel,... View Obituary & Service Information

The family of Gordon Gene Halfrich created this Life Tributes page to make it easy to share your memories.

Gordon Gene Halfrich, 69, passed away peacefully in his home...

Send flowers to the Halfrich family.