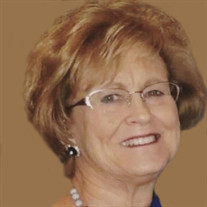 Gloria J. Barnum,78, died Saturday, November 21, 2020, at Mercy One Medical Center in Sioux City, IA. There will be a private family service held. Christy-Smith Funeral Homes, Morningside, is assisting the family with arrangements. Gloria Jean Taylor, the daughter of Conrad and Ruby (Nelson) Taylor was born July 20, 1942, in Webster County, IA. On January 20, 1961, Gloria was united in marriage with Robert G. Barnum in Roelyn, IA. She was a homemaker and mother and traveled with her husband in support of his career. The couple moved from Fort Dodge, IA to Kansas, TX, and then back home to Iowa. In 1990, Gloria became the owner/operator of the Daily Grind in Sioux City, which she ran until her retirement in 2003. Gloria was a member of the Bridge Club and the Tri-T Club. Her greatest love, however, was her family and she greatly enjoyed spending time with her grandchildren. Gloria is survived by her daughters, Suzie (Tom) Goetz of Kearney, NE, Jeanne (Jeff) Zyzda of Sioux City; her grandchildren, Tristy Goetz of Madison, WI, Haleigh (Michael) Smith of Omaha, NE, Aaron (Morgan) Zyzda of Sioux City; her great-grandchildren, Ainsley Smith and Michael “Tripp” Smith III; her siblings, Arlene Marshall of Orange, CA, Gary Taylor of Moorland, IA, Beth Blom of Greenville, SC; and many other relatives and friends. She was preceded in death by her parents; husband; and a grand-daughter, Jackie Smith. In lieu of flowers, the family has requested that donations be directed to Lila Mae’s House in Sioux City.

The family of Gloria Jean Barnum created this Life Tributes page to make it easy to share your memories.

Send flowers to the Barnum family.