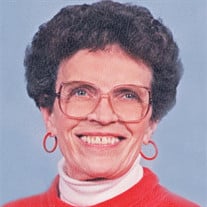 Gloria A. August, 93, formerly of Sioux City, died Thursday, Feb. 7, 2019, at the Pleasant View Care Center in Whiting. Services will be 10:30 a.m. Monday at St. Joseph Catholic Church in Salix, Iowa. Visitation will be one hour prior to the service Monday at the church. Arrangements are under the direction of Morningside Chapel, Christy-Smith Funeral Homes, Sioux City. Gloria Ann Grass, the daughter of Harvey and Anna (Mack) Grass was born Oct. 24, 1925, in Sioux City. She graduated from high school in Mapleton, Iowa, in 1943. Upon graduation, she and a couple of her classmates moved to Washington, D.C., and worked for the FBI. In April of 1945, Gloria was united in marriage to Milo Clayton in Washington, D.C. They had one son, Michael. She was later united in marriage to William "Bill" August on June 29, 1962, in Spencer, Iowa. Gloria was employed at the Credit Bureau of Sioux City for over 20 years. Bill died Feb. 18, 2000. Gloria was a former member of Immaculate Conception Catholic Church in Sioux City and served in the Altar Society. She was a 15-gallon donor at the Blood Bank and was an avid bowler. Gloria is survived by her son, Mike (Sharon) Clayton of Salix; three grandsons, Darren (Julie) Clayton, and their children, Katelyn and Addison, of Auburn, Iowa, Carl (Emily) Clayton, and their children, Jack and Charlie, of Salix, and Steven Clayton of Salix; a sister, Lora Wessling of Sergeant Bluff; and nieces and nephews. She was preceded in death by her parents; husbands; a brother-in-law, Jim Wessling; and a nephew, David Wessling. The family has requested that memorials be directed to the Siouxland Humane Society.

Gloria A. August, 93, formerly of Sioux City, died Thursday, Feb. 7, 2019, at the Pleasant View Care Center in Whiting. Services will be 10:30 a.m. Monday at St. Joseph Catholic Church in Salix, Iowa. Visitation will be one hour prior... View Obituary & Service Information

The family of Gloria Ann August created this Life Tributes page to make it easy to share your memories.

Send flowers to the August family.