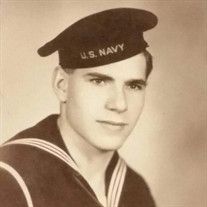 Glenn P. Jones, 93, formerly of Oto, IA, died Friday, March 5, 2021, at Holy Spirit Retirement Community in Sioux City, IA. A funeral service will be 10:00 am Saturday, March 13, 2021, at First Baptist Church in Climbing Hill, IA with visitation one hour prior. Burial will be in Westfork Township Cemetery in Climbing Hill. Christy-Smith Funeral Homes, Morningside Chapel, is assisting the family with arrangements. Online condolences can be sent to the family at www.christysmith.com. Glenn Paul Jones, the son of Howard and Dorothy (Goodrow) Jones was born March 17, 1927, in Cheyenne, WY. He graduated from high school in Cheyenne in 1944. Glenn then entered the U.S. Navy and served during World War II. He was stationed on the U.S.S. Nevada as a lookout. After the war, he served on supply ships that travelled to various locations in the Pacific including Okinawa and Iwo Jima, Japan. He was honorably discharged in 1948. On September 5, 1948, Glenn was united in marriage with Elizabeth Ilinitch in Cheyenne. Glenn attended Iowa State University for a short time, before transferring to Colorado State University. He received a Mechanical Engineering Degree, graduating in 1952. Glenn designed storage containers for DuPont in North Augusta, SC at the Savanah River Plant. After his retirement in 1985, Glen moved his family to a farm near Oto, IA, where he enjoyed gardening and hunting and fishing with his grandchildren. Elizabeth died November 15, 2017. Glenn is survived by his children, Dawn Hair of Sioux City, Judy (Mark) Snowden of Des Moines, IA, Bonnie Shea of Kennesaw, GA; six grandchildren; seven great-grandchildren; and many other relatives and friends. He was preceded in death by his parents, wife, and three siblings. The family has requested that memorials be directed to Hospice of Siouxland or Samaritan’s Purse based out of Boone, NC.

The family of Glenn Jones created this Life Tributes page to make it easy to share your memories.