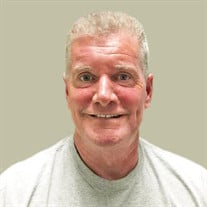 Gerard “Chet” O’Neill, 65, of West Des Moines, passed away peacefully with his family by his side on Thursday August 26, 2021, in Des Moines, IA. A public memorial service will be 4:00 pm Saturday, September 4, 2021, at Christy-Smith Funeral Homes, Larkin Chapel, 2320 Outer Drive N., with a public visitation one hour prior. A celebration of life will follow at Buffalo Alice, 1022 4th St, Sioux City. Online condolences may me expressed to the family at www.christysmith.com. Chet was born on January 20, 1956, in Brooklyn, NY, to Vincent and Mary (Ronayne) O’Neill. He attended St. Brendan's elementary school and Midwood high school both, in Brooklyn. Following high school, he attended Mount Marty College in Yankton, SD from 1974 to 1978 on a basketball scholarship. It was at Mount Marty where he met his teammates that became his brothers and life-long friends. In 2017 the boys reconnected after 30 years when the ‘76-‘77 team was inducted in the Mount Marty hall of fame as one of the most successful teams in school history. They have had multiple reunions in San Antonio, Omaha, and Yankton that Chet cherished deeply. After graduation Chet had a brief stint as a teacher in O’Neill, NE. On January 12, 1981 he began his career as a police officer with the city of Sioux City until his retirement on September 7, 2005. Chet was a well-liked and respected officer. He worked all three uniformed shifts, was a dedicated dog handler, and was a member of the motorcycle unit for several years. In 2001 Chet helped initiate the Blue Angels program after responding to repetitive requests for scared and lonely senior citizens. Chet was an avid weightlifter most of his life. He spent a majority of his free time at the police department gym or Four Seasons Health Club. Chet also enjoyed taking Rosie on motorcycle rides. They participated in many poker runs in the early 2000’s. No matter where he lived, he made sure to make church a priority, and was always willing to lend a helping hand. Chet’s greatest joy and passion was his family. As he grew older he traded in the gym for his spot on the couch. His favorite activity was sitting with the puppies enjoying a cup of coffee. Don’t forget the two sugars. Chet’s unconditional love and compassion for a little girl named Leslie Anne Enockson earned him the title of “Prince Chet”. They watched countless Disney movies, played games, and often snuggled. Chet is survived by his love of 30 years, Rose; children, Ben (Jazmine), Molly, Brandon (Tessa), Dustin (Katie); grandchildren, Evan, Dillon, Tatum, Brooke, Kyla; brothers, James, Kevin, Keith; and his favorite puppies, Maggie, Oliver, and Sunny. He was preceded in death by his parents and older brother, Vincent.

The family of Gerard Francis "Chet" O'Neill created this Life Tributes page to make it easy to share your memories.

Send flowers to the O'Neill family.