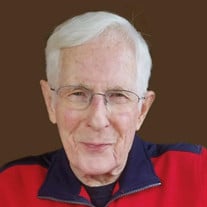 Gerald "Jerry" E. Lapora, 87 of Sioux City, Iowa died on Sunday, August 2, 2020, in Sioux City, Iowa. A Funeral service will be at 2:00 PM on Friday at Christy-Smith Morningside Chapel located at 1801 Morningside Ave. Sioux City, Iowa 51106 with the Chaplain Merlyne Smith of St. James United Methodist Church officiating. Interment will be in Memorial Park Cemetery, Sioux City, IA. The family will receive friends from 1:00 PM to 2:00 PM on Friday, August 7, 2020, at Christy-Smith Morningside Chapel, 1801 Morningside Ave., Sioux City, Iowa. Online condolences may be made to the family at www.christysmith.com Jerry was born May 13, 1933 in Sioux City, Iowa, to Edward (Eddie) H. and Leila F. (Houchins) Lapora. He was the first of three children. He grew up in Sioux City and graduated from Central High School in Sioux City. He entered and served in the US Air Force from June of 1952 until he was honorably discharged in June of 1956. He married Jeanne Moffet in Nov. 1959; the couple were blessed with a daughter Jessie in 1966. Jeanne died in 1970. Jerry and Jessie moved to Sioux City later that same year. Jerry started working at Blue Cross & Blue Shield in late 1970. He met Anna Griener there and the couple were married in November of 1971. Anna died in August of 2014 after 42 years of marriage. In 2018, Jerry met the love of his life June Sneller. He was a member of St. James United Methodist. Surviving are his daughter, Jesse (David) Hicks of South Sioux City, NE. numerous nieces and nephews, fiancé'; June Sneller and many other family members. He was preceded in death by his parents, first wife; Jeanne, second wife; Anna, his brother Don Lapora and sister Barb Max. In lieu of flowers memorials are suggested to St. James United Methodist Church in Sioux City or Hospice of Siouxland.

The family of Gerald E. Lapora created this Life Tributes page to make it easy to share your memories.

Send flowers to the Lapora family.