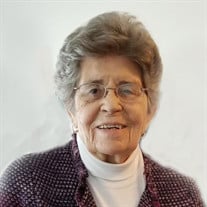 Genevieve M. "Mitzi" McCullough, 95, formerly of Sioux City, died Wednesday, July 29, 2020, in her home with her family by her side. Mass of Christian Burial will be 10:30 am Monday, August 3, 2020, at Mater Dei Parish-Immaculate Conception Catholic Church with visitation one hour prior. Burial will be in Calvary Cemetery. Christy-Smith Funeral Homes, Morningside, is assisting the family with arrangements. We will be set up for social distancing and attendees will be required to wear masks. Born January 18,1925, in Menominee, NE to Boniface and Mary Havermann Goeden, Mitzi grew up on a farm and was educated in the area. Her nickname "Mitzi" was given by her maternal grandmother. Mitzi worked for local families before moving the Omaha to work as a dispatcher in the bomber factory during WWII. Later she moved with her cousin to Sioux City, where she met William "Bud" McCullough. They were united in marriage June 10, 1947, at Holy Trinity Catholic Church in Hartington, NE. Together, Bud and Mitzi raised three daughters in Sioux City. Mitzi worked many years as a school cook for Immaculate Conception Church. In 1968, Mitzi was struck by lightning while fishing in MN. She survived against all odds due to her Geoden fighting spirit, and lived to make many more memories. Mitzi was active in parish life, Catholic Daughters of America, Board of the Carmelites, and volunteered at Bargain Center. She was an avid golfer, card player, cook and sports fan. In her younger years Mitzi played baseball with her nine siblings and in later life enjoyed watching baseball, football, tennis and golf on television. She refinished furniture for her immediate family and several nieces and nephews. As a special gift, Mitzi once assembled and finished a grandfather clock from a kit. For many years, Bud and Mitzi hosted their grandsons, several nieces and nephews spending summers and semesters at work or school in Sioux City. Mitzi's Catholic faith and family were most important in her life. She lived life in a true Christian spirit and was a role model to many in charity, work ethic, and generosity of time, talent and treasure. Mitzi is survived by her daughters, Theresa (Jack) McTaggart of Emerson, NE; Patty Lammers of Council Bluffs, IA; Cathie (Cosy Simon) McCullough of Traverse City MI; four grandsons, Jim (April) McTaggart and family of Red Wing, MN; Joe McTaggart of Omaha; Tim (Alicia) McTaggart and family of Omaha, NE; Dan McTaggart of Omaha; sisters, JoAnn Hirschman of Emerson, NE, and Gladys Tacke of Yankton; many other relatives and friends. Mitzi is preceded in death by her husband Bud McCullough; her parents; sisters Esther Kuchta, Kathleen Griess; five brothers, Emil, Bud, Norm, Kenny, Don Goeden. Memorials can be directed to Immaculate Conception Catholic Church, the Carmelite Monastery or Hospices of Siouxland.

Genevieve M. "Mitzi" McCullough, 95, formerly of Sioux City, died Wednesday, July 29, 2020, in her home with her family by her side. Mass of Christian Burial will be 10:30 am Monday, August 3, 2020, at Mater Dei Parish-Immaculate Conception... View Obituary & Service Information

The family of Genevieve Mary "Mitzi" McCullough created this Life Tributes page to make it easy to share your memories.

Send flowers to the McCullough family.