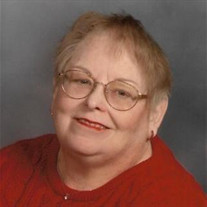 Genece “Jenny” Guillaume Quinn, age 79, of Westby, Wisconsin formerly of Jefferson, South Dakota died on Thursday, February 28, 2019 at Gunderson Lutheran Medical Center in La Crosse, Wisconsin. Mass of Christian Burial will be held at 11:00 a.m., Friday, March 8, 2019 at St. Peter Catholic Church in Jefferson with Father David Roerich celebrating. Burial will follow in St. Peter’s Cemetery. Visitation will be held one hour prior to the mass at the church with the Rosary being recited at 10:30 a.m. Larkin Chapel Christy Smith Funeral Home is handling the arrangements. Genece was born in Sioux City, Iowa on October 1, 1939, the daughter of Clement and Eleanor (Callahan) Guillaume and was raised in Elk Point, South Dakota. She married Freeman Quinn on November 5, 1966 and the couple resided in Jefferson, SD. She worked for Consecutive Mortgage Company, Security National Bank Trust Department, and Briar Cliff University where she served as Registrar for 30 years. She was the longest serving registrar at Briar Cliff. She also served as the Parish Secretary for Blessed Teresa of Calcutta Catholic Church in Dakota Dunes. Genece was a member of the Catholic Daughters of America and The Red Hat Society. She loved square dancing, playing bridge and mastering jigsaw puzzles. Traveling was a great passion of hers, She traveled domestically and internationally always, interested in learning and seeing the world. She loved quilting and socializing with her many friends. She is survived by her sister, Sara (Vern) Austin; brothers, Gary Thomas Guillaume and Peter (Patti) Guillaume; brother-in-law, Earl Anderson; sister-in-law, Marie Guillaume; as well as many nieces, nephews, grand-nieces, and grand-nephews. She was preceded in death by her parents; her husband, Freeman; a brother, Gregory Guillaume; and sister-in-law, Lorraine Anderson. Memorial may be made to the Genece Quinn Memorial Fund.

The family of Genece Quinn created this Life Tributes page to make it easy to share your memories.

Send flowers to the Quinn family.