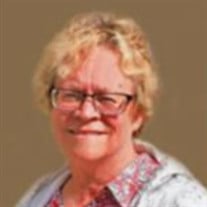 Gayle A. Canterbury, 69, of Sioux City, died Monday, October 12, 2020, at Sanford Fargo Hospice in Fargo, ND. A memorial service will be 11:00 am Tuesday, October 20, 2020, at Morningside Lutheran Church with visitation one hour prior. The family is not requiring masks, but social distancing will be appreciated. Gayle Annette Canterbury, the daughter of Lester and Arlie (Grotelueschen) Jensen was born December 27, 1950, in Council Bluffs, IA. She graduated from East High School in 1969, and went on to earn a Bachelor’s degree in Education from Augustana College in Sioux Falls, SD. She then completed her Master’s degree at Morningside College in Sioux City. On August 7, 1976, Gayle was united in marriage with Thomas “Tom” Canterbury in Sioux City. She was a teacher in the Sioux City school system for her entire 34-year career, retiring in 2015. Gayle was a life-long member of Morningside Lutheran Church. After retirement, she became an active member in the Sioux City Quota Club. Gayle enjoyed knitting and made many quilts for her family members. She also greatly enjoyed spending time at the family cabin on Rose Lake near Frazee, MN. Gayle is survived by her husband, Tom of Sioux City; children, Matthew of Windsor, CO, Lisa (Justin) Robbins of Colorado Springs, CO, Seth of Studio City, CA; five grandchildren; a brother, Mark (Cheryl Sklors) Jensen of Onawa, IA; and many other relatives and friends. She was preceded in death by her parents.

Gayle A. Canterbury, 69, of Sioux City, died Monday, October 12, 2020, at Sanford Fargo Hospice in Fargo, ND. A memorial service will be 11:00 am Tuesday, October 20, 2020, at Morningside Lutheran Church with visitation one hour prior.... View Obituary & Service Information

The family of Gayle Annette Canterbury created this Life Tributes page to make it easy to share your memories.

Send flowers to the Canterbury family.