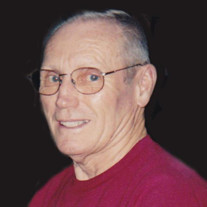 On Thursday March 26, 2020 at approximately 5:30 p.m. Gary took the only flight of his life to be reunited with his wife Donna Jean, and his Lord Jesus just inside the pearly gates of Heaven. Gary was born on January 29,1936 in Ponca, Nebraska to his parents Merrill Reising and Maxine Reising (Rakow). Gary spent his young years growing up on the farm with his siblings in Allen NE. Later in life the family moved into Iowa around Hinton. Gary in high school helped a farmer as his first job that he had until he graduated from Hinton High School in 1954. Shortly after graduation he joined the United States Army. Gary spent a couple of years patrolling by boat the harbors of duty stations in France and Spain, amongst other assignments. He was honorably discharged. Gary settled in Sioux City and began working for Sue Bee Honey. Shortly after that he met the love of his life, Donna Jolin and they were married. They had two children, Edward and Machelle (Bisonnette) Reising. Gary found his career path when he became a brakeman and then conductor for the railroad most recently known as Burlington Northern. He worked there for nearly thirty years until a couple of work injuries had him retire on disability. Gary later drove vans shuttling train personnel and lastly until just before his death, as a car courier for Jensen Motors. Gary was preceded in death by his wife, Donna; his parents, Merrill and Maxine; his brother, Frank; and sister, Sandra Beavers. Living relatives are brothers, Steve and Mike; sisters Jackie Smith and Marilyn Reid; his children; 5 grandchildren; 7 great-grandchildren; a great-great-grandson; and many nieces, nephews and great nieces and nephews. His love of Christ was well known as he shared that love with most he came in contact with. He was a member of Good News Baptist Church. Please log on to Christy-Smith Funeral Homes' website under Gary's obituary to add tributes and any pictures you might want to post from years gone by. Due to current situations further info on a memorial service at Good News Church will be made available when that becomes known/allowed.

On Thursday March 26, 2020 at approximately 5:30 p.m. Gary took the only flight of his life to be reunited with his wife Donna Jean, and his Lord Jesus just inside the pearly gates of Heaven. Gary was born on January 29,1936 in Ponca, Nebraska... View Obituary & Service Information

The family of Gary Lynn Reising created this Life Tributes page to make it easy to share your memories.

Send flowers to the Reising family.