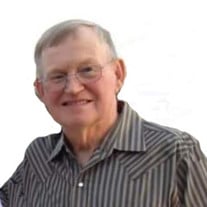 Gale Ray Jessip, age 82, of Sioux City, passed away Saturday, April 16, 2022, at a local hospital surrounded by his family. Visitation will be 4:00-7:00 p.m. Thursday, April 21, 2022, at Christy-Smith Funeral Homes, Larkin Chapel. Funeral service will be 10:30 a.m. Friday, April 22, 2022, at Riverside United Methodist Church. Burial will be at Elk Point Cemetery in Elk Point, SD. Gale Jessip was born on January 8, 1940, in Sioux City. He grew up and attended school in the area. On June 2, 1962, he was united in marriage to Janis Girard, with whom he spent just short of 60 wonderful years of marriage. To this union was born one child, Brent Jessip. Gale began working when he was 15 at Ted’s Café and Lantis Family for many years. He then worked at Daily Redwood as a laborer, followed by construction at George Hardy. He then worked at Gary Roan Construction while doing tree work on the side while he was able. He ended his 15-year career at Hawthorne Grade School as a custodian. Gale’s philosophy in life was always, another man’s junk is another man’s treasure. He loved taking his dog Susie on walks, collecting cans, and going to the races with his son, Brent. He went roller-skating at Rollerama every Saturday until he was 80 years old. His whole life revolved around his loving wife, Janis, whether it be square dancing, roller-skating, or going to the local casino to play the penny slots. If he was no where to be found you could always find him at his childhood friend, Stella’s home, playing a game of cards over a cup of coffee until her passing in 2021. After Stella’s passing her daughter, Teresa took over the game of cards while her son, Les took over the conversation. He is survived by his wife, Janis Jessip of Sioux City, IA; son, Brent (Lori) Jessip of Sioux City, IA; granddaughters, Sadie Jessip of Sioux City, IA, Stephanie (Spencer) Hansen of Hinton, IA; grandson, Shane Jessip of Sioux City, IA; brothers, Clifford (Helen) Jessip and Clark (Judy) Jessip of California. He is preceded in death by his parents, Arthur and Katherine Jessip; brothers, Doug, Gene, Jack, Bruce, and Elvon; sisters, Betty Chamberlain, Vivian Trobaugh, Joy Meyers, and Eunice Husk. The family would like to thank Kathy Flaugh for her help and support throughout this difficult time.

The family of Gale Ray Jessip created this Life Tributes page to make it easy to share your memories.

Send flowers to the Jessip family.