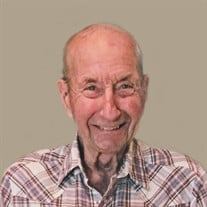 Gail W. Bauerly, 90, died peacefully Monday, November 29, 2021, at Bickford Cottage in Sioux City, IA. A visitation will be 5:00 pm to 7:00 pm Thursday, December 2, 2021, at Christy-Smith Funeral Homes, Larkin Chapel, 2320 Outer Drive North. Mass of Christian Burial will be 10:30 am Friday, December 3, 2021, at Holy Cross Parish-St. Michael Catholic Church with burial to follow in Calvary Cemetery. Online condolences may be directed to the family at www.christysmith.com. Gail William Bauerly, the son of Allison and Viola Bauerly was born June 15, 1931, in Leeds, IA. He attended various country schools and graduated from Lawton High School in 1950. On April 28, 1956, Gail was united in marriage with Mary E. “Betty” Brennan in Sioux City. The couple made their home near Moville, IA and then rural Sioux City where they raised their family. Betty died May 24, 2019. Gail worked at the stockyards, drove truck for Gene Hegstrom, worked at the Sioux City Foundry, Case Power and Equipment, All Wheel Drive, and Ace Engine. However, his favorite and longest jobs were making a living as a farmer and when he worked as the service manager for Siouxland Bobcat. Gail was raised Catholic and was a member of St. Michael’s Catholic Church where he enjoyed being an usher for many years. He enjoyed woodworking and tinkering in his workshop. Gail was creative and could fix anything. He was a perfectionist, honest, and hardworking. Gail took great pride in his work and keeping up the homestead. Gail loved spending time outside and mowing the yard. He also enjoyed watching westerns and visiting. Gail was proud to have been a blood donor, donating more than 19 gallons. Gail is survived by his children, Jim (Diane) Bauerly, Kathy (Craig) Engel, Julie (Dave) Kaplan; grandchildren, Tiffany (Daven DeKok) Bauerly, Staci (Brad) Schoorman, Nick (Jen) Bauerly, Kyle (Emily Ekart) Engel, Kami (Chris) Arford, Evan (Stephanie Reyes) Engel, Adam (Haley) Kaplan, Cassy (Nick) McBride; eight great-grandchildren; sisters-in-law, Martha Ihrman, Sally Bauerly, Dawn Bauerly; and many other relatives and friends. He was preceded in death by his parents; wife; son, Billy; siblings, Marilyn Harris, Jack Bauerly, Anneeta Hansen, Barbara Jensen, and Gordon Bauerly. The family would like to thank a special friend, Donna Lehrkamp, for her years of caregiving she provided for both Betty and Gail. Special thanks also to the wonderful caregivers at Bickford Memory Care and his Care Team from St. Croix Hospice who provided such loving care for Dad in his last five months. The family has requested that memorials be directed to St. Croix Hospice and the Siouxland Soup Kitchen.

The family of Gail W. Bauerly created this Life Tributes page to make it easy to share your memories.

Send flowers to the Bauerly family.