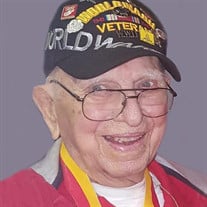 Fred W. “Fritz” Lettau Jr., 97, died Friday, August 16, 2019, at his residence in Sioux City, IA. A visitation will be 4:00 p.m. to 7:00 p.m., Wednesday, August 21, 2019, at Christy-Smith Funeral Homes, Morningside, with a prayer service at 7:00 p.m. A funeral service will be 10:30 a.m., Thursday, August 22, 2019, at Christy-Smith, with burial to follow in Memorial Park Cemetery. Online condolences can be made to the family at www.christysmith.com Fred “Fritz” William Lettau Jr., the son of Fred Sr. and Ida (Schroeder) Lettau was born June 16, 1922, in Thurston, NE. He graduated from Central High School in Sioux City in 1941. Fred then went to work at Milwaukee Weiner. On December 25, 1942, Fred was united in marriage to Ruth Rameden in Sioux City. He enlisted in the U.S. Marine Corps and served honorably as a Marine Raider. Fred was stationed in the South Pacific, Okinawa, and Guadalcanal. He received a Purple Heart during his service and later in life was honored to be named Marine of the Year. Fritz was discharged in 1945 at the rank of Corporal. Fred returned to Sioux City and graduated from Morningside College with a degree in Mathematics. He then became a police officer, and was the first motorcycle officer in Sioux City. After doing this for 11 years, Fritz went to school in Texas to become an insurance agent. He continued to sell insurance until late into his life. Fred was a member of the Marine Corps League, the American Legion, the V.F.W., and the River City Anglers. He enjoyed fishing, cooking, and playing the harmonica. Fritz also greatly loved animals. Fred is survived by two daughters, Ruth “Bugs” Cornell and Janet Hein, both of Sioux City; three grandchildren, Dennis (Carolyn) McKenzie, Teresa (Jeff) Johnson, Aaron (Liz) Hein; three great-grandchildren, Cameron, Shaylee, Kambell; a sister-in-law, Helen Schultz of Minnesota; and many other relatives and friends. He was preceded in death by his parents; wife; and a sister, Elsie Earlandson.

The family of Fred "Fritz" William Lettau JR. created this Life Tributes page to make it easy to share your memories.

Send flowers to the Lettau family.