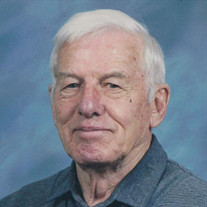 Francis “Lad” W. Speck, 95, died Friday, September 25, 2020, at his residence in Sioux City, IA. A memorial service will be 1:00 pm Thursday, October 1, 2020, at Christy-Smith Funeral Homes, 1801 Morningside Ave., with visitation one hour prior. Due to the threat of Covid, the family requests, but does not require, masks. Francis “Lad” Walen Speck, the son of Reinhart and Gertrude (Marshall) Speck was born December 9, 1924, in Rockport, MA. He attended Rockport schools, became an Eagle Scout, and went on to enlist in the U.S. Air Force. After his honorable discharge, Lad earned his Bachelor’s Degree in Biology from Tuff’s University in Massachusetts and later his Master’s in Education from Salem State. Lad was united in marriage with Barbara Neilson. The couple later divorced. Lad was employed as a High School Science teacher for his entire career. His proudest moment was when he recently received letters from previous students, thanking him for being a great teacher. Lad always talked about Gloucester, MA in his Boston accent. He spent many hours reading and playing games. Lad moved to Sioux City and then married Clarice Hammerstrom. He was a member of the Rustin Ave. United Methodist Church and also volunteered many, many hours over 20 years at Tumacacori National Historical Park in Arizona. From his first marriage, Lad is survived by his children, David (Reiko) Speck of California, Robin (deceased) (Kevin) Barker of North Carolina, Rebecca (John, deceased) DeCaro of Iowa; and grandchildren, Shaw Keneyaswu-Speck, Kaye Kaneyasu-Speck, David Barker, Kristopher Barker, Brian DeCaro, Sam DeCaro, John DeCaro; and five great-grandchildren. From his second marriage, Lad is survived by his wife, Clarice; five step-children; six grandchildren; and 16 great-grandchildren. Lad was preceded in death by his parents; four siblings; his former wife, Barbara; daughter, Robin Barker; and a son-in-law, John DeCaro. In lieu of flowers, memorials may be made to the charity of your choice.

The family of Francis "Lad" Walen Speck created this Life Tributes page to make it easy to share your memories.

Send flowers to the Speck family.