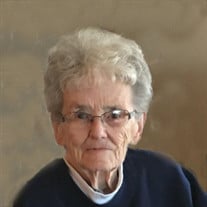 Frances Marie Quintard, 97 of Sioux City, IA, died on Sunday, March 10, 2019. A funeral service will be at 10:30 AM on Tuesday, March 19, 2019, at Faith United Presbyterian Church located at 4327 Morningside Ave., Sioux City, IA 51106 with the Rev. David Koehler officiating. Interment will be in Memorial Park Cemetery, Sioux City, IA. Visitation will be from 4:00 PM to 8:00 PM; the family will be present from 6:00 PM to 8:00 PM on Monday, March 18, 2019 at Christy-Smith Morningside Chapel, 1801 Morningside Ave., Sioux City, IA 51106. Frances was born February 8, 1922 in Sioux City, IA to Ernest and Gladys (Kesner) Campbell. She grew up on a farm near Merrill, IA and graduated from Merrill High School. She married Arthur “Mel” Quintard on November 26, 1941. Due to Mel serving in WWII, they moved to North Carolina where he was stationed. After the war, they established residency around the Lawton, IA area. To this union, four daughters and a son were born. In 1955, they moved to Sioux City, IA to raise their family. Frances worked for Toller Drug and later the Red Owl store. In her upper 40’s, Frances went “back to school” enrolling in Western Iowa Tech’s first classes held in the downtown area. After receiving her Medical Secretary degree, she transcribed medical files for Dr. Ziebell for close to 30 years until her retirement. Mel passed away in 2003 after 62 years of marriage. Frances was a member and deacon of the Faith United Presbyterian Church and a member of the church’s ladies circle. In younger years, Mel and Frances were devout card players belonging to several card clubs. She was always appreciative to other’s kind gestures, loved to cook and solve crossword and Wheel of Fortune puzzles. Her greatest joy was spending time with her family and taking road trips to family gatherings and reunions. She thoroughly enjoyed her grandchildren and her beloved pets. Mourning her loss are her three daughters, Kay Barnes of Aurora, CO, Bonnie Beermann (John Curtis) of Aurora, CO, Jeannie (Mark) Peterson of Sioux City, IA and one son, Mark (Vicki) Quintard of Sioux City, IA; 12 grandchildren; 23 great-grandchildren and numerous nieces and nephews. Frances was greeted at Heaven’s gates by her parents, her husband; her daughter Rita Kersenbrock, her granddaughter Brook Quintard; a sister Doris Sullivan and two brothers Virgil Campbell and Merlin Campbell. Memorials may be directed to Faith United Presbyterian Church. Online condolences may be made to the family at www.christysmith.com.

The family of Frances Marie Quintard created this Life Tributes page to make it easy to share your memories.

Send flowers to the Quintard family.