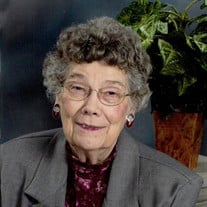 Frances M. (Gasink) Gard, 102, Sioux City died at a local nursing home on May 9, 2021. Funeral services will be 2:00 pm on Friday, May 21st at the Christy-Smith Funeral Homes Morningside Chapel (located at 1801 Morningside Ave) with Chaplain Lorna Peters officiating Burial will follow at Memorial Park Cemetery. Visitation will be on Thursday, May 20th from 5-8 pm. A prayer service will be held at 7pm. Condolences may be left online for the family at www.christysmith.com Frances was born April 23, 1919 in Sioux City to George and Maud (Hatter) Gasink. She graduated from East High School in January 1937 and from Morningside College in June of 1940. She married Lowell E. Gard on February 1, 1941 at the Morningside Presbyterian Church. The couple farmed east of Sioux City for 40 years. Upon their retirement they moved to Leeds. She was a member of the Wesley United Methodist Church for many years, and she also attended Riverside Methodist Church. Her hobbies were dancing, playing cards, swimming, and eating chocolate. Frances and Lowell were members for more than 15 years of the Peersonian Dance Club, which held monthly meetings, dedicated to keeping the dance steps and music they loved alive at The Oasis in Sergeant Bluff. Frances enjoyed volunteering at both St. Luke's Hospital and the Sioux City Senior Center. She served on the Cancer Board in Sioux City, as secretary for the Woodbury County Extension Council for years, represented Concord township as the Woodbury County Woman of the Year. Frances was a member of the Eastern Star Silver Chapter and the South Sioux City Eagles Club #548. She believed everyone owed something back to their community and in her own way she tried to contribute back to hers. Those left to cherish her memory are her four children: Roger and Carol Gard of rural Danville, IA, John and Aylene Gard of Lexington, KY, Crystal Gard Kurtze of Omaha, NE and Candi and Robert Smith of Hereford, AZ, daughter in-law: Julie Gard of Rural Sioux City, 13 grandchildren, 19, great grandchildren, 9 great-great grandchildren. She was preceded in death by her parents George and Maud (Hatter) Gasink, husband; Lowell Gard, son; Kenneth Gard, brother; Warren Gasink, sister; Virginia (Gasink) King and one grandchild.

Frances M. (Gasink) Gard, 102, Sioux City died at a local nursing home on May 9, 2021. Funeral services will be 2:00 pm on Friday, May 21st at the Christy-Smith Funeral Homes Morningside Chapel (located at 1801 Morningside Ave) with... View Obituary & Service Information

The family of Frances Mary Gard created this Life Tributes page to make it easy to share your memories.

Send flowers to the Gard family.