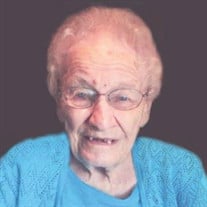 Frances Florke, 100, formerly of Correctionville, IA, passed away Saturday, January 2, 2021, peacefully of congestive heart failure. A funeral service will be 11:00 am Thursday, January 7, 2021, at Calvary Lutheran Church in Sioux City, IA with visitation one hour prior. Burial will be in Greenwood Cemetery in Pierson, IA. Masks and social distancing will be required. The service will be live streamed at www.facebook.com/calvaryleeds. The family is being assisted with arrangements by Christy-Smith Funeral Home, Morningside. Frances was born July 11, 1920, in Correctionville to Ernest and Inez (Streeter) Jeffrey. She attended rural country school. Frances married Willie Florke on August 22, 1938, in Elk Point, SD. To this union six daughters were born, Donna Lou, Diana, LaVonne, Betty, Beverly, and Janet. The couple farmed in the Pierson and Correctionville areas until 1971 when they moved into town. Frances was a homemaker and also worked at Sunrise Manor in Sioux City and then was the head cook at Eastwood Community School for 24 years. She moved to Pheasant Acres in Sioux City where she lived for 18 years, and then to Pioneer Valley in Sergeant Bluff for the last two and half years. Frances was a member of Grace Lutheran Church in Correctionville and upon moving to Sioux City, became a member of Calvary Lutheran. Frances spent many hours with her hobbies. Crocheting was very much enjoyed with making many afghans and doilies for the family. She also enjoyed jigsaw puzzles. Family members share fond memories of goodies and treats. Christmas time meant many candies, cookies, hot cinnamon rolls, and homemade ice cream. Frances is survived by daughters, Donna Lou Cockburn of Correctionville, LaVonne Mathis of South Sioux City, NE, Betty (Ken) Meister of Wilmar, MN, Beverly (Randy) Fitch of Hinton, IA, Janet (Dennis) Hansen of Sioux City; a sister, Opal Forch of Sioux City; 15 grandchildren; 24 great-grandchildren; six great-great-grandchildren; and numerous nieces and nephews. She was preceded in death by her husband, Willie, in 1980; daughter, Diana in 1982; sons-in-law, Gerald Willems and Richard Cockburn; two grandchildren; one great-grandchild; five brothers; and two sisters. In lieu of flowers, memorials may be given to Grace Lutheran in Correctionville, Calvary Lutheran in Sioux City, or an organization of your choice.

The family of Frances Florke created this Life Tributes page to make it easy to share your memories.

Send flowers to the Florke family.