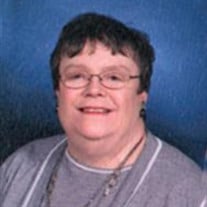 Frances Patricia “Patty” Beyer, age 79, of Sioux City died Sunday February 14, 2021 at a local hospital. Memorial Mass will be held at 10:30 a.m., Wednesday, February 24, 2021 at Holy Cross Parish, Blessed Sacrament Church with Father David Hemann officiating. Burial will be at a later date in Calvary Cemetery. Visitation with the family will be one hour prior to the service on Wednesday at the church. Christy-Smith Funeral Homes, Larkin Chapel is in charge of arrangements. The service will be livestreamed on both the Holy Cross Parish website ( https://holycrosssc.org/frances-patricia-patty-beyer-funeral ) and Facebook page ( https://facebook.com/holycrossparishsc ) Patty was born in Sioux City on October 14, 1941, the daughter of Frank and Kay (McEwen) Whicher. She attended the Sioux City public schools and graduated from Central High School with the class of 1960. She was united in marriage with John “Jack” Beyer on April 27, 1968. He preceded Patty in death on August 18, 2017. The couple was blessed with two sons: Kevin and Patrick. Patty was a secretary until her children were born and then she returned to work in 1978 at Gordon Recovery and the Iowa Department of Human Services in homemaker services. In 1990 she began working for the Sioux City Community Schools as a teacher’s aide until retiring in 2005. Patty was a member of Blessed Sacrament Church and was also a member of the Catholic Daughters of America. She loved music and enjoyed playing the organ and piano. She loved spending time in Okoboji in her younger years. In her later years, she loved being part of the water aerobics group at the YMCA, chatting with friends in her kitchen, and getting together with her lunch and dinner group friends. She also enjoyed spending time with her two grandchildren. Patty had a heart for persons with disabilities. She was an advocate for her son, Kevin, and others with Down Syndrome. She also had a passion to help the students with autism and cognitive disabilities for whom she was a para for in the Sioux City Schools. Patty is survived by two sons, Kevin Beyer of Sioux City, and Patrick (Amanda) Beyer of Sioux City; grandchildren, Genna and Jack Beyer; sister, Laurie (Rob) Daykin; many loved nieces and nephews; and many other relatives and friends. She was preceded in death by her parents; her husband; and four sisters, Colleen, Cathleen, Sue, and Peggy. In lieu of flowers, the family requests memorials in Patty’s name be made to Blessed Sacrament Church or Park View Homes.

The family of Frances Patricia "Patty" Beyer created this Life Tributes page to make it easy to share your memories.

Send flowers to the Beyer family.