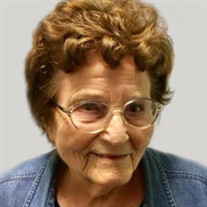 Evelyn Mitchell, age 94, passed away Wednesday, July 22, 2020 in Sioux City, IA. Funeral services will be 10:00 a.m. Wednesday, July 29, 2020 at Christy-Smith Funeral Homes, Morningside Chapel. Burial will be at Memorial Park Cemetery. Visitation will be held one hour prior to the service. Evelyn Mae Johnson, the daughter of Newton and Zella (Utterback) Johnson, was born March 22, 1926 in Smithland, IA. She grew up on a farm in the area and graduated from Smithland High School. Evelyn was united in marriage to John D. Mitchell on July 17, 1943. The couple had 5 children. Evelyn was a homemaker until her children were grown, she then worked various jobs outside of the home. Evelyn loved to play cards. She enjoyed spending time with her family and grandchildren. Evelyn is survived by her children, Marvin (Connie) Mitchell of North Sioux City, SD, Linda Worrell of Sioux City, IA, Dale (Linda Lee) Mitchell of Moville, IA, Bryce (Angela) Mitchell of Bradenton, FL, and Russ (Ramona) Mitchell of Le Mars, IA; 25 grandchildren; 47 great-grandchildren; 2 great-great grandchildren; siblings, Edwin Johnson and Elaine Echtinaw. She is preceded in death by her parents; husband, John; son-in-law, Richard Worrell; and two brothers.

The family of Evelyn Mae Mitchell created this Life Tributes page to make it easy to share your memories.

Send flowers to the Mitchell family.