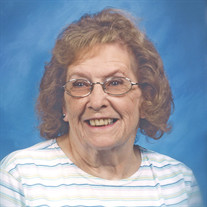 Evelyn V. Christensen, 85, died Wednesday, November 6, 2019, at Floyd Place in Sergeant Bluff, IA. A memorial service will be 1:00 p.m., Wednesday, November 13, 2019, at Christy-Smith Funeral Homes, Morningside Chapel, with burial to follow in Graceland Cemetery. Online condolences can be made to the family at www.christysmith.com. Evelyn V. Jackson, the daughter of Herschel and Lola Mae (Zeigel) Jackson, was born January 8, 1934, in Tarkio, MO. She attended school at Sergeant Bluff-Luton. Shortly after high school, Evelyn moved to San Francisco, CA. Evelyn returned to Sergeant Bluff in 1969 and was united in marriage with Don Christensen in 1973. Don died in 1986. Evelyn worked for Western Iowa Tech and then Tyson Foods, retiring in 2006. Evelyn was a member of Community United Methodist Church in Sergeant Bluff. She enjoyed bowling, crafts, and crocheting, which she used to make prayer shawls for the church. Evelyn is survived by her daughter, Anita Iwen of Sioux City, IA; two grandchildren, Mike (Amy) Osterholt of Kearney, NE, Melissa Barber of Sioux City; and five great-grandchildren, Sage, Abigail, Hanna, Jacen, and Chase; and her best friend, Bunny McLarty. She was preceded in death by her parents; her husband; and siblings, Everett Jackson and Janet Harder. The family has requested that memorials be directed to the Community United Methodist Church in Sergeant Bluff. The family would like to thank the staff at Floyd Place, Theresa and Bethany at Hospice of Siouxland, Dr. Bacon, and Dr. Harder.

The family of Evelyn V. Christensen created this Life Tributes page to make it easy to share your memories.

Send flowers to the Christensen family.