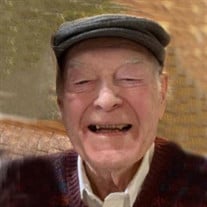 Eugene “Gene” N. Geary died on Monday May 9, 2022 at a Sioux City care facility. Mass of Christian Burial will be held at 11:00am Thursday May 12, 2022 at 11:00am at Mater Dei Immaculate Conception Catholic Church with burial following in St Joseph Cemetery Neptune. Visitation will be held on Wednesday from 4:00-7:00pm Wednesday with the Rosary recited at 6:30pm and a Parish Vigil Service held at 7:00pm at Christy Smith Morningside Chapel. Gene was born in Climbing Hill, Iowa on July 27, 1934 the son of Phillip and Margaret E "Nellie" Roeser Geary. He attended Climbing Hill school until the 9th grade, when due to his father’s accident he was needed at home to run the farm. He was united in marriage with Roxie Woody on April 6, 1956 at Immaculate Conception Catholic Church in Sioux City. Roxie preceded him in death on March 2, 1997 in Sioux City. Gene was a hard worker his entire life. He worked at Swift Packing until the plant closed, and then worked for 30 years for Sioux Tools. He was very skilled in carpentry, and he could fix anything. He was very proud of the fact that he was able to put his 5 children through the Catholic school system. He instilled in his children a good work ethic and the belief that you took care of others as well as your family. Gene loved watching Jackie Gleason on the television and never missed an episode of Hee Haw. Gene loved playing cards, especially Pinochle. He was a past member of the International Association of Machinists and was a member of Mater Dei Immaculate Conception Church. Gene is survived by his sons Nick(Cecilia) of Ankeny, IA., Tim(Lori) of Hope Mills, NC., Dan(Deb) of Menefee, CA., Ken( Diane) of Sioux City and his daughter Joyce Geary of Omaha, NE. He is also survived by his eight grandchildren and 19 great-grandchildren. He was preceded in death by his parents, his wife Roxie, his brother James, a grandson Brian, and his special friend Colleen Montagne. In lieu of flowers, the family requests memorials in Gene’s name be made to Catholic Charities.

The family of Eugene "Gene" N. Geary created this Life Tributes page to make it easy to share your memories.

Send flowers to the Geary family.