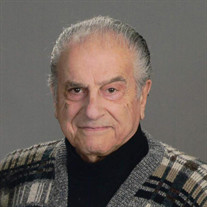 Ernest E. “Ernie” Haddad, 94, passed away peacefully Wednesday, August 18, 2021, at MercyOne Medical Center in Sioux City, IA. A private family service has been held. Christy-Smith Funeral Homes, Morningside Chapel, assisted the family with arrangements. Ernest Emil “Ernie” Haddad, the son of Michael and Mary (Butrous) Haddad was born April 20, 1927, in Sioux City, IA. He attended Central High School in Sioux City before going into the U.S. Army. After his discharge, Ernie went to school in Spokane, WA, to become a machinist. On July 7, 1958, Ernie was united in marriage with Patricia “Pat” Langford in Sioux City. He worked as a machinist at Sioux Tools for over 43 years, retiring in 1989. Ernie was a member of Grace United Methodist Church. Ernie is survived by his wife, Pat; children, Timothy (Sue) Haddad of Swansea, IL, Thomas (Elizabeth) Haddad of Omaha, NE, Lezlie Haddad of Omaha; two grandchildren, Stewart Haddad and Melissa Haddad, both of Wichita, KS; a brother, Amil of Sioux City; and many other relatives and friends. He was preceded in death by his parents and two sisters. The family has requested that memorials be directed to the Music Department at Grace United Methodist Church.

The family of Ernest Emil "Ernie" Haddad created this Life Tributes page to make it easy to share your memories.

Send flowers to the Haddad family.