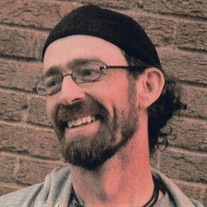 Eric “Doghouse” Riley joined his final band on March 5, 2021 in Sioux City. Visitation will be Thursday, March 11, from 4-7 PM with a memorial service at 7 PM at St. Mark Lutheran Church, 5200 Glenn Avenue with Pr. David Halaas presiding. Cremation has taken place under the direction of Christy-Smith Morningside. A memorial jam session is being planned for this summer. Seating will be limited for the service and facemasks are required in the building. The service will be streamed live on St. Mark’s Facebook page and broadcast on FM 98.1 in the church parking lot. Eric was born January 27, 1974 in Mayfield, KY to Clarence and DeeEtta Riley. The family moved back to Sioux City in 1977. Eric attended Sioux City schools, graduated from East High in 1992 and attended Morningside College. He was married to Monique (Sanders-Riley) Westerhold and had three children, Jade, Dylan and Ella, who were his pride and joy. Eric was a fine musician and outstanding bass player who embraced all genres of music and could play any of them. He started playing bass in bands in middle school and never stopped. Survivors include his children, Jade, Dylan and Ella; his mom {Yo’ Momma}(Pat Cheever), brother Charlie (Molly) Riley, sister Amanda (Jon) Bellis, numerous aunts, uncles, nieces, nephews, cousins and a plethora of friends and musicians. Eric was preceded in death by his dad, Clarence, Grandaddy Gene and Grandma Sue Riley, Grandpa Cal and Grandma Grace Steffe, and other family. In lieu of flowers, memorials may be made to the American Heart Association, the Sioux City Conservatory of Music or St. Mark. Eric loved his family, friends, music and baseball. He will surely be missed. The memories and music he left us with are more than just notes on a page. They are also written in our collective hearts. Rock in Peace.

The family of Eric Todd Riley created this Life Tributes page to make it easy to share your memories.

Send flowers to the Riley family.