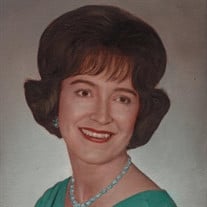 Elizabeth “Betty” Bernard, 93, of Dakota Dunes, SD, died Monday, February 24, 2020 at Holy Spirit Retirement Home in Sioux City. A funeral mass will be held at 11:00 a.m., Friday, February 28, 2020 at Blessed Teresa of Calcutta Catholic Church, 995 N Sioux Point Rd, Dakota Dunes, SD 57049. A visitation will be held one-hour prior to service time. Burial will be 3:00 p.m., Monday, March 2, 2020 at Memorial Park Cemetery. Christy-Smith Funeral Homes, Larkin Chapel is assisting the family with arrangements. Betty was born July 31, 1926 in Pittsburgh, Pennsylvania, to John and Anna McClelland. She attended business college in Pittsburgh and joined the Civil Service there. She then worked for the U.S. Air Force Education Center in Erding, Germany. After transferring to the Pentagon in Washington, DC, she worked for the Terminology Branch, Office of the Director of Administrative Services (Air Staff). She then transferred to the position of Executive Secretary to the Deputy Assistant Secretary (R&D) of the Air Force and later, Administrative Assistant to the Deputy Assistant Under Secretary (Systems Review). In 1966 Betty married USAF Colonel Duane Bernard of Jefferson, SD, at Bolling Air Force Base in Maryland. When Duane was reassigned as Staff Judge Advocate at Anderson AFB on Guam, Betty served there as Secretary to the Base/Wing Commander. On his next SIA assignment, to Tinker AFB in Oklahoma City, Betty was Secretary to the Chief, Management Engineering Team. Betty retired with 20 years of Civil Service in 1976, shortly after Duane retired. The couple moved to Sioux City, where she was a volunteer member of the “Y Wives” (YMCA) and a volunteer for six years at St. Joseph Hospital (later Marian Health). She enjoyed playing bridge and cribbage and was a long-time member of the Gail Smith Chine Club. She painted many beautiful pieces of china, such as lamps, plates, tea sets, and Christmas ornaments. Betty loved to play golf and was very proud of her hole-in-one at Sun Valley Golf Course. Betty was preceded in death by her husband in 2005, and by her parents, brother, and three sisters. She is survived by many nieces, nephews, great nieces and nephews, and dear friends. Pallbearers will be Steve Allard, Wayne Pedersen, Blake Allard, Tommy Kennevan, Dale Fahrendorf, and Ray Schmitz. In lieu of flowers, please direct memorial contributions to the American Lung Association or to the Carmelite Nuns of Sioux City.

The family of Elizabeth L. "Betty" Bernard created this Life Tributes page to make it easy to share your memories.

Send flowers to the Bernard family.