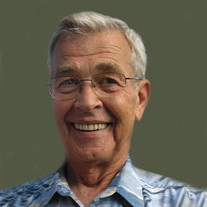 Elgene Arnell Erickson age 81, of Sioux City died Friday, September 4, 2020 at his residence. Funeral Services will be held at 10:30am on Friday, September 11, 2020 at Christy-Smith Morningside Chapel, 1801 Morningside Avenue, Sioux City, Iowa 51106 with burial following in Memorial Park Cemetery. Visitation will be held on Thursday from 6:00-8:00 p.m. at the funeral home. The family requests those in attendance at either the visitation or the service dress casually in either Iowa Hawkeye or Chicago Cubs attire. Gene was born in rural Union County South Dakota on October 12, 1938, the son of Emerald and Phyllis (Ulrickson) Erickson. He attended Elk Point Community Schools and following graduation he attended Morningside College for three years. He served his country as a member of the United States Navy from 1957-1959. He was united in marriage to Marlene Gstohl on July 20, 1960 in LuVerne, Minnesota. The couple made Sioux City their home. Gene served the Sioux City community as a police officer for 29 years before retiring as a Lieutenant with the department in 1994. He enjoyed playing golf, fishing, square dancing, bowling, and he was a HUGE fan of both the Iowa Hawkeyes and the Chicago Cubs. He loved the time he could spend with his family and cherished the time he could spend with his grandchildren and great grandchildren. Gene is survived by his loving wife of 60 years Marlene; his four children Debbie (Randy) Miller of McCook Lake, SD, Doug (Melanie) Erickson of Spink, SD, Beth (Tim) Woldt of Minneapolis, MN, and Dave (Dawn) Erickson of North Sioux City, SD; 15 grandchildren; 26 great-grandchildren; two sisters, Glennyce Vigil of Phoenix, AZ and Arlys (Dave) Eaton of Scosttsdale, AZ; and a sister-in-law, Kate Lefler of Stuart, FL. He was preceded in death by his parents; brother, Dean; and brother-in-law, David Lefler. In lieu of flowers, the family requests memorials in Gene’s honor be directed to either the June E Nylen Cancer Center in Sioux City or Hospice of Siouxland.

The family of Elgene A Erickson created this Life Tributes page to make it easy to share your memories.

Send flowers to the Erickson family.