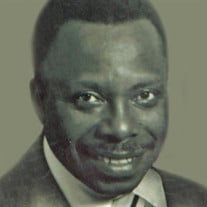 Elem Ford Sr., 90, of Sioux City, died Jan. 30, 2019, at home, surrounded by family, following a lengthy illness. Service will be 11 a.m. Saturday at Mt. Zion Missionary Baptist Church, with Rev. Willie Ray Ford and Rev. Jeremy F. Robertson, Sr. officiating. Burial will be in Logan Park Cemetery. Visitation will be 4 to 8 p.m. Friday, with the family present 6 to 8 p.m. and a prayer service at 6:45 p.m., at Morningside Chapel, Christy-Smith Funeral Homes, 1801 Morningside Ave. Condolences can be left for the family online at www.christysmith.com. Mr. Ford was born Dec. 1, 1928, in Lisman, Ala., to Hilliard and Jeannie (Keeton) Ford. He attended school in Yantley, Ala. Elem married Egellow Coleman on Oct. 30, 1948, in Meridian, Miss. She passed away Jan. 10, 1996. He worked construction for many years and later worked for IBP as a lead man on the production line, retiring in 1995 after 30 years with the company. Elem was the pastor and bishop of Mt. Sinai Holiness Church for more than 40 years. Preaching of love and faith, a passage from his favorite scripture Psalms 121: "I will lift up mine eyes to the hills, from whence cometh my help. My help cometh from the Lord, which made heaven and earth." Bishop Ford enjoyed spending time preaching the gospel and with family and friends. He loved to praise the Lord and continued to do so until God called him home. He is survived by his four sons, Elem Ford, Jr., Steve Ford, Robert Ford and Kelvin Ford, all of Sioux City; six daughters, Dollie Ford and Pamela Ford, of Dallas, Texas, Kathy James and Anita Ford of Sioux City, Laurie and her husband, Jerry Brown, of O’Fallon, Mo., and Frances Ford of St. Charles, Mo.; a brother, Freddie Ford, Sr., of Yantley; 22 grandchildren; 25 great-grandchildren; and several great-great-grandchildren. He was preceded in death by his parents, Hilliard and Jeannie Ford; wife, Egellow; two sons, Adam and Tommy Ford; three daughters, Mary Louise Henderson, Cornelia Sue Ford and Lorraine Ford; two brothers, Willie James Ford and Wardell Ford; and a son-in-law, Clifton Henderson.

The family of Elem Ford created this Life Tributes page to make it easy to share your memories.

Send flowers to the Ford family.