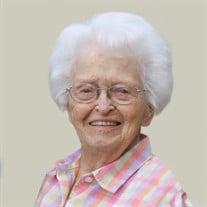 Eleanor A. Beacom, 103, died Wednesday, March 24, 2021, at Unity Point-St. Luke’s Medical Center in Sioux City, IA. A private (due to Covid concerns) family Mass of Christian Burial will be held at Holy Cross Parish-St. Michael Catholic Church in Sioux City with burial in Calvary Cemetery. The family is hoping to hold a Memorial Service this summer. Christy-Smith Funeral Homes, Larkin Chapel, is assisting the family with arrangements. There will not be a Visitation. Eleanor Avolene Heitzman, the daughter of Homer and Mata Giese Heitzman was born December 21, 1917, in Emerson, NE. She was raised on a farm and attended a one-room country school. She graduated from high school in Emerson in 1935. Eleanor went on to graduate from the Lutheran School of Nursing in Sioux City in 1939 as a Registered Nurse. She then became employed as a nurse with Dr. Downs. On September 16, 1941, Eleanor was united in marriage with John F. Beacom. She was a homemaker for many years, and raised nine children. She loved gardening, cooking, and baking. John died October 25, 1968. Eleanor then became recertified as an RN and worked at St. Monica’s Nursing Home. She began working at Holy Spirit Retirement Home in 1972 and became Director of Nursing. She retired in 1996. Eleanor was an active member of St. Michael Catholic Church, the Catholic Daughters of the Americas, and the Altar Society. Eleanor was a dedicated volunteer, and spent many hours working at the Bargain Center, where she was also a Board member, at the Soup Kitchen, and at the Carmelites. Eleanor is survived by her sons, John (Margaret) Beacom Jr. of North Richland Hills, TX, David (Mary) Beacom of Broomfield, CO, Barrett “Barry” (Claudia) Beacom of Rochester, MN, E. Kevin (Nadine) Beacom of Littleton, CO, Brian Beacom of Cedar City, UT, Matt (Elizabeth) Beacom of North Haven, CT and a niece she raised, Katherine Forney Gumbrecht of Yorba Linda, CA; 24 grandchildren; 21 great-grandchildren; her cousin Densel Moseman; and many other relatives and friends. She was preceded in death by her parents; husband, John; son, Greg Beacom; her twin sister, Alice Richarz; sister, Kathleen Heitzman; and a niece she raised, Constance “Connie” Forney Hanson. The family has requested that memorials be directed to the Trinity Heights Queen of Peace Center, the Bargain Center, or the Carmelite Nuns of Sioux City.

The family of Eleanor Avolene Beacom created this Life Tributes page to make it easy to share your memories.

Send flowers to the Beacom family.