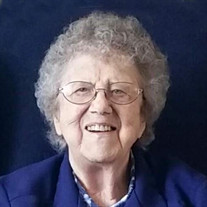 Elaine Kreutzian, 92, died Sunday, December 8, 2019, at a local Sioux City hospital. A memorial service will be held January 25, 2020, at 11:00 a.m. at Augustana Lutheran Church. Visitation will be one hour prior at the church, and interment will be in Augustana's Memorial Garden. Elaine Winifred Peterson was born January 28, 1927, to Theodore and Freda (Loewe) Peterson in Mankato, MN. She graduated Fairmont High School in 1944 and the Lutheran Bible Institute in Minneapolis, MN, in 1949. During the 1950’s Elaine was a church secretary at Como Park Lutheran Church in St. Paul, MN, and Oak Grove Lutheran Church in Richfield, MN. Elaine was united in marriage with Donald Harris Kreutzian on May 7, 1960, in Richfield, MN. They made their homes in Minnesota, Australia, Colorado, Nebraska, Iowa, and Texas. During the 1960’s the couple owned and operated Briggs Lake Hardware & Superette in Clear Lake, MN. Elaine was always active in church in the many places they lived, and she enjoyed attending Bible study groups. In 1989 they moved to the Siouxland area to care for their first grandson. As a member of Augustana Lutheran Church, Elaine was active in the Piece Corps quilting group as the chief square cutter as well as the women’s Bible study groups. Elaine is survived by her four children, Karen (Richard) LaCroix of Omaha, NE, Marlene (Jeff) Levine of South Sioux City, NE, Ronald Kreutzian of Omaha, NE, and Mark (Pam) Kreutzian of Hutto, TX; nine grandchildren, Christopher, Robyn, Daniel, Nickol, Jonathan, Justin, Kathleen (Kyle), Corey, and James; siblings, DuWayne (Roselyn) Peterson, and Sharon Schweitzer; and many beloved nieces and nephews. She is preceded in death by her husband, Don; parents; siblings, Ramona Filipek, Charlene Epis, Bruce Peterson, and Charles Peterson.

Elaine Kreutzian, 92, died Sunday, December 8, 2019, at a local Sioux City hospital. A memorial service will be held January 25, 2020, at 11:00 a.m. at Augustana Lutheran Church. Visitation will be one hour prior at the church, and... View Obituary & Service Information

The family of Elaine W. Kreutzian created this Life Tributes page to make it easy to share your memories.

Send flowers to the Kreutzian family.