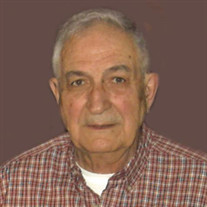 Edward Daniel Rowe, 87, of Sioux City, died Sunday, Feb. 17, 2019, at a local hospital. Services will be 10:30 a.m. Friday at Morningside Chapel, Christy-Smith Funeral Homes. Burial will be in Graceland Park Cemetery. Visitation with the family will be 9:30 a.m. until service time Friday at the funeral home. Edward Daniel Rowe, the son of George and Pearl (Beaubien) Rowe, was born on Sept. 7, 1931, in Sioux City. He was a student of the first graduating class from Bishop Heelan High School in 1950. Later that year, Edward was drafted into the U.S. Army during the Korean War. He was stationed in Okinawa, Japan for 19 months. On June 6, 1953, Edward was united in marriage with Joanne Grubel in Sioux City. They had two sons, Brad and Dan. Edward worked in the electric shop at Cudahy Packing Company until they closed. After that, he worked for the U.S. Postal Service for 43 years. He retired in 1995. One of Edward's hobbies was fishing. For 50 years he went to Canada on his annual fishing trip with his family and friends. He enjoyed the companionship of his beloved pug, Haily Jo. Edward was a very helpful and busy person. He was also an avid Iowa football fan. Edward is survived by his wife, Joanne; sons, Brad (Joan) Rowe, and Dan (Sherri) Rowe; grandchildren, Melanie (Russell) Albenesius, Matt (Cyndi) Rowe, and Melissa (Josh) Hansen; great-grandchildren, Abby, Carli, Molly, Madelaine, Miranda, Ruby, Brody, and Bella; a sister, Patty Lamoureux; and many nieces and nephews. He was preceded in death by his parents; grandson, Ryan Rowe; and brother, George Jr. In lieu of flowers, the family has asked that memorials be made to Edward's wife, Joanne, to establish a memorial in his name at the Siouxland Humane Society.

The family of Edward Daniel Rowe created this Life Tributes page to make it easy to share your memories.

Send flowers to the Rowe family.