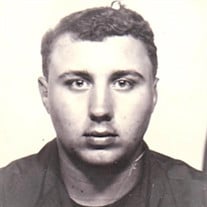 Sergeant Edward "John" Reinert, 71, passed away peacefully surrounded by family at UnityPoint- St. Luke’s Hospital on September 18, 2021. Edward was a decorated veteran who served in the Vietnam. The metals he received were National Defense Service Metal, Vietnam Service Medal w/2 Bronze Service Stars, Republic of Vietnam Campaign Medal. Sharpshooter (Rifle). John Reinert was born on June 6, 1950 in Le Mars, Iowa, to his parents Edward and Agnes Reinert. He graduated in 1969 from Heelan High School. When he was 21, John enlisted in the Army. He received his training at Ft. Leonard Wood Missouri, Aberdeen Proving Grounds Maryland, and then he was stationed at USAARMS Ft. Knox, Kentucky. He then transferred USAR Fort Hood, Texas. Then he went on to serve in Vietnam. When he returned home to Sioux City, Iowa, he continued his education at Iowa Tech for truck driving. In the service he completed Track Vehicle Mechanic and Automotive Mechanic. When he was not working, John had a passion for fishing and hunting. He was always the Big Brother and Protector of his siblings. John was a loving brother and a brave and honorable soldier. He is survived by his siblings, Marilyn, Alan, Dennis, Barbara, Lisa, and Paul. Edward "John" was preceded in death by his parents, Edward & Agnes and sister, Katherine "Kathy" John was cremated and will be laid to rest with his grandfather, William Muller in Marcus. We are working on getting a Celebration of Life plan and will update our memorial website with that info as soon as we have it.

Sergeant Edward "John" Reinert, 71, passed away peacefully surrounded by family at UnityPoint- St. Luke&#8217;s Hospital on September 18, 2021. Edward was a decorated veteran who served in the Vietnam. The metals he received were... View Obituary & Service Information

The family of Edward John Reinert created this Life Tributes page to make it easy to share your memories.

Send flowers to the Reinert family.