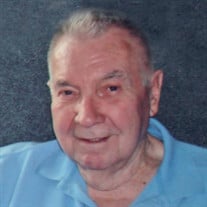 Edward Anthony Nelson, age 88, of Sioux City died on Sunday May 31, 2020 at a Westwood Specialty Care in Sioux City. Funeral services will be held at 10:00 a.m., Saturday, June 6, 2020 at Christy-Smith Funeral Homes, Morningside Chapel with Pastor Liz Tucker officiating. Burial will follow at Memorial Park Cemetery. Visitation with the family present will be held from 5:00-7:00 p.m. Friday at the funeral home. Social Distancing for the visitation and funeral service must be followed. Ed was born in Fargo, North Dakota to William Herberg and Margaret Mary Elizabeth Fowler on May 20, 1932. He attended Catholic schools in Fargo until the sixth grade. He served his country during the Korean War as a member of the United States Army. Ed drove a container truck for the Sioux City Milk Producers for many years. He also drove a semi for M&M Transfer and parked cars for Paradise Park. In his spare time he would fix cars at his own small repair shop. In retirement he was the maintenance man at Regency Mobile Home Park. He married Mary Rouse and to this union three children were born: Paula, Ronda, and Curtis. He is survived by his daughters, Paula Nelson of Sioux City, and Ronda (Gil) Blundell of Sloan; son, Curtis of North Carolina; stepdaughter, Debbie Grant and her extended family of Arizona; granddaughter, Jennifer (Kelly) Shuffield of Midwest City, Oklahoma and their daughter, Mabyn; granddaughter, Sarah Blundell of Denver, Colorado; grandson, Robby Blundell of Whiting; granddaughter, Kelli Ann (Aaron) Sandman and their sons, Beckham, and Max of Minnesota, whom he never met; grandson, Tremayne of Sioux City, whom he also had never met; his sister, Joann (Elmer) Reed and their families; brother, Raymond (Theresa) Nelson and their families; nieces and nephews and their families; Eileen’s extended family; and last but not least, Sandi Spaulding. He was preceded in death by his mother, Margaret and stepfather, Nick Nelson; brother, Duane Robert; sister, Dorothy (Art) Gilbert and their daughter; his special friend, Eileen; along with several other relatives. Family would like to thank the nursing care from hospice. Two thumbs up from Ed.

The family of Edward Anthony Nelson created this Life Tributes page to make it easy to share your memories.