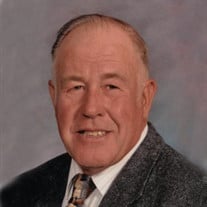 Edward W. "Ed" Heutinck, 82, of Lawton, passed away Saturday, June 30, 2018, at his residence. Services will be 10:30 a.m. Friday at Immaculate Conception Catholic Church in Moville, Iowa. Burial will be in Arlington Township Cemetery. Visitation will be 4 to 7 p.m. Thursday at the church. Arrangements are under the direction of Morningside Chapel, Christy-Smith Funeral Homes in Sioux City. Ed Heutinck, the son of George and Nora (Siebke) Heutinck, was born on March 16, 1936, in Golden City, Mo. After graduating high school, he joined the U.S. Army. Ed was stationed in Europe for two years and was able to travel extensively before his honorable discharge. On Nov. 4, 1963, Ed was united in marriage with Kathleen Mullen at St. Boniface Catholic Church in Sioux City. Ed and Kathy have been married for 54 years. He was employed with Swift and Company, and then with Heritage Homes in Nebraska. Later in life, Ed worked doing home construction, which he did until his retirement. Ed was active in his church throughout his life. He enjoyed gardening, boating, fishing, water skiing, and camping. His favorite summer activity was boating on the Missouri River with his family. Ed always loved going back to the family farm to help his brother, Joe, with the harvest. Ed is survived by his wife, Kathleen of Lawton; children, Susan (Todd) Hoffman of Baldwin City, Kan., Steven (Mindy) Heutinck of Kansas City, Mo., and Christine Heutinck of Kansas City; seven grandchildren, Samantha (Kenny) Resecker, Joshua Hoffman, Jordan Hoffman, Harrison Heutinck, Logan Heutinck, Katelynn Heutinck, and Morgan Heutinck; siblings, Dorothy (Leo) Wagner, Joe (Kris) Heutinck, Theresa (Rod) Leipold, all of Minnesota; and many nieces and nephews. He was preceded in death by his parents; a brother, Leonard; a sister, Loretta; and half sisters, Mary Nutt and Jeanette Behrens. Flowers may be sent to the Immaculate Conception Catholic Church, 419 Jones Street, Moville, IA 51039.

The family of Edward Heutinck created this Life Tributes page to make it easy to share your memories.

Send flowers to the Heutinck family.