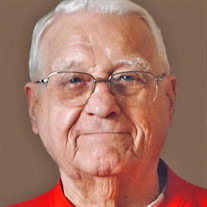 Earnest Junior McKeown, 89, of Sioux City, passed away Friday, January 15, 2021 at a local hospital from COVID-19. Services will be held at a later date. Per his wishes, he was cremated and will later be interred at the Iowa Veterans Cemetery in Van Meter. Earnest Junior McKeown was born June 8, 1931 in Onawa, IA. He grew up in the area and graduated from Whiting High School in 1949. He then began working in farming. In 1952 he entered the U.S. Army and served in Korea. He was very proud of his military service and loved to share wartime stories. On December 22, 1954 he married Lorraine Odegard in Sioux Falls, SD. The couple made their home in Sioux City and recently celebrated their 66th anniversary. Earnest began working for Swift & Company in 1953, retiring after the company closed its doors in 1984. Upon his retirement, he took classes at Western Iowa Tech. Earnest was a former member of Concordia Lutheran Church. He was known to always help out his family, friends, and neighbors. He was an accomplished woodworker. He enjoyed gardening, reading, music, playing the slots, and watching the Minnesota Twins and Vikings. He was exceptionally proud of his children and grandchildren, who will miss his love, kindness, and silly jokes. Earnest is survived by his wife, Lorraine McKeown of Sioux City, IA; daughter, Kathryn (Tom) Specketer of Winterset, IA; son, Mark (Jerri) McKeown of Graham, WA; grandchildren, Stephanie McKeown of Vallejo, CA, Kelli (Henry) Bi of Issaquah, WA, Erik McKeown of Spokane, WA, Kyle Specketer of Winterset, IA, Krista Specketer of Seattle, WA; sister-in-law, Pat McKeown of California; brother-in-law Ed Odegard and his daughter Paula Colarusso of New York; along with many other nieces, nephews, and friends. He is preceded in death by his parents, Earnest and Inez; stepfather, Raymond Johnson; brothers, Eugene and Darryl; sisters, Fern, La Ree, Irene, and Lois; stepbrothers, Carl, Kenneth, Norman, Phillip, and Dick; and infant son, David McKeown. Expressions of sympathy and memorials may be directed to the family at Christy-Smith Larkin Chapel, 2320 Outer Drive N, Sioux City, IA 51104.

Earnest Junior McKeown, 89, of Sioux City, passed away Friday, January 15, 2021 at a local hospital from COVID-19. Services will be held at a later date. Per his wishes, he was cremated and will later be interred at the Iowa Veterans... View Obituary & Service Information

The family of Earnest Junior McKeown created this Life Tributes page to make it easy to share your memories.

Send flowers to the McKeown family.