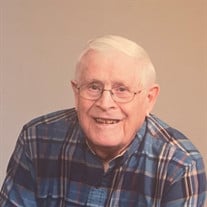 Dwight W. Godfrey, age 92, of Sioux City, passed away Sunday, October 31, 2021, at a local hospital. Memorial Service will be 11:00 a.m. Friday, November 5, 2021, at Grace United Methodist Church with visitation one hour prior to the service. Christy-Smith Funeral Homes, Morningside Chapel is assisting the family with services. Dwight Walter Godfrey, the son of Leonard and Azalia (Clark) Godfrey, was born January 27, 1929, in Washta, IA. As a young boy he moved to Sioux City where he grew up, graduating from East High School. Upon graduation in 1947, he enlisted in the U.S. Army, serving until 1948. He was called again to serve in Korea from 1950 to 1952 attaining the rank of Master Sergeant and earning many commendations including the Purple Heart. On October 12, 1951, Dwight was united in marriage to Mary Lou Sauder Oleson in Sioux City, where they made their home and raised their two children. Dwight spent many years as a bookkeeper at the Sioux City Stock Yards, retiring in 1984. It was then that the couple moved to western Colorado where they spent 20 years, making many friends and enjoying golf and traveling. They returned to Sioux City in 2004. Dwight was a member of Grace United Methodist Church and Masonic Lodge 615. He enjoyed wood carving, playing cards and time spent with family. He is survived by his wife, Mary Lou Godfrey; son, Scott (Laura) Godfrey; daughter, Susan Steuer; 6 grandchildren; 6 great grandchildren; brothers, Dale (Janet), Delano (Helen), Max (Sharon), Lanny (Karon); sister, Judy Utesch; sisters-in-law, Kay, Connie; along with numerous nieces and nephews. He is preceded in death by his parents; brothers, Bob, Jim, Clark, Edward; sister, Dorothy Amick; brothers-in-law, Ed Amick and Ric Utesch; sisters-in-law, Audrey and Mary.

The family of Dwight Walter Godfrey created this Life Tributes page to make it easy to share your memories.

Send flowers to the Godfrey family.