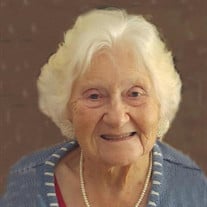 Dorothy Elaine Strong, 94, of Allen, NE was received by her Lord on Sunday, August 16,2020 at her home after a lengthy battle with Alzheimer’s Disease and heart failure. Funeral services will be held at Trinity Lutheran Church in Martinsburg, NE on Friday, August 21 at 10:30. Reverend Michael Awe will be officiating. Visitation with family will be one hour prior to service at 9:30. Private family Interment will be at Graceland Cemetery, Sioux City, IA. The funeral services will be streamed on Facebook at www.facebook.com/groups/446928699180529/?ref=share Online condolences may be made to the family at www.christysmith.com Memorials may be directed to the family for future designation. Arrangements are under the direction of Christy-Smith Funeral Home Morningside Chapel, Sioux City, IA. Dorothy was born on the farm near Allen, NE on April 11, 1926 to August and Emma (Fuoss) Lunz. She was the second to the youngest of 9 children and attended Trinity Lutheran Church in Martinsburg, NE where she was baptized, confirmed and grew in her faith. She attended high school in Maskell, NE and transferred to Newcastle High School as a senior and graduated in 1944. After graduation she moved to Sioux City, IA and was employed at St. Joseph’s Hospital as a nurse’s aide. She later worked as a grocery clerk at Harold’s Grocery Store where she met her future husband, Raymond Strong, who was also employed there. She married Raymond on January 10, 1954 in Martinsburg, NE. In 1960, they settled on the family farm near Bronson, IA where they farmed and raised their family. Ray passed away in December 1999. Dorothy continued to live on the farm until 2013 when she moved to Allen, NE to reside with family. Dorothy had numerous jobs throughout the years, cooking at the Lawton-Bronson High School, administrative assistant for a nonprofit organization that assisted those 55 and older find employment, and as a residential aide helping the mentally challenged at Woodbury County Homestead. She was an active member of Bethel Lutheran Church in Lawton, IA for many years. She enjoyed helping others and had a special place in her heart for those who were struggling and less fortunate. Her strong faith in the Lord helped her throughout her lifetime and she was able to share that faith and comfort with others. She shared a very close bond with her special need’s grandson, Cory, with whom she spent countless hours. The title that Dorothy enjoyed most though, was Mom, Grandma and Great Grandma. She loved making Sunday dinners for her family and her meal was never complete without a few good pies. Her generous spirit and ability to laugh during tough times will be missed by all who knew her well. The family would like to extend a special thank you to all who cared for Dorothy with kindness and compassion; Dr Steven Joyce and staff, care providers Lynne Saunders and Linda Roth and the teams with Palliative Care and Hospice of Siouxland. Dorothy was preceded in death by her parents, August and Emma, her husband Raymond, an infant daughter Sandra Sue, grandson Cory Tomlinson and great granddaughter Aslyn Elaine O’Riley, brothers: George (Bernice), Chester(Millie), Wilfred(Margaret), LeRoy(Betty) and Clifford; sisters: Margaret(Clarence)Schlines, Viola (Walter)Small, Irene Lunz and sister-in-law Eleanor Armstrong. She is survived by her daughter, Donna (Rich) Roland, Allen, NE; son. Jim (Diane) Strong, Honey Creek, IA; grandchildren, Kristin (Derek) O’Riley, Dylan Roland, Matthew, Andrea and Aaron Strong; great grandchildren, Brecklan and Elise O’Riley; sister-in-law, Jane Lunz and many nieces and nephews.

Dorothy Elaine Strong, 94, of Allen, NE was received by her Lord on Sunday, August 16,2020 at her home after a lengthy battle with Alzheimer&#8217;s Disease and heart failure. Funeral services will be held at Trinity Lutheran Church... View Obituary & Service Information

The family of Dorothy Elaine Strong created this Life Tributes page to make it easy to share your memories.

Dorothy Elaine Strong, 94, of Allen, NE was received by her Lord...

Send flowers to the Strong family.