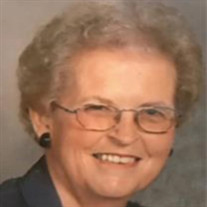 Dorothy (Butler) Smith, 90, passed away peacefully May 3rd, surrounded by her family. Private graveside services will be at a later date in Pleasant View Cemetery in Carthage, SD. Dorothy was born on February 12th, 1930, in Atchison, KS, to Sumner and Vivian Butler. She attended school in Atchison county. She moved to Kansas City, MO after high school and attended Business School and worked for the Atomic Energy Commission. She later attended Manhatten Bible College. Upon completion she attended Dakota Bible College in Huron, SD. She was attending church in Carthage, SD when she met her husband, Thomas Smith. They married in Farmington, KS in 1954. After spending the early years of their marriage in the Black Hills and Washington state, they returned to Carthage, SD, to farm and raise their four sons. They remained together until Tom’s passing in 2016. While living in Carthage, Dorothy was involved in many community projects, including the planning and construction of the Carthage Straw Bale Museum. She served as president of the American Legion Auxiliary, taught Sunday school, played piano and led song services at the Church of the Nazarene as well as led Bible studies in her home. She had numerous talents including making beautiful quilts, knitting, gardening, painting and she was a terrific cook. She was an avid reader and enjoyed caring for numerous stray cats. She had an appreciation for her ancestry. She was proud to be a great granddaughter of Rev. Pardee Butler, a renowned abolitionist in Kansas who helped with the Underground Railroad during the 1860’s. She and her husband moved to Sioux City, IA in 2010 to reside with their son and family. She is survived by three sons, Pat of Howard, SD, Jeff of Bismarck, ND and Steve of Sioux City, IA, a grandson, Matt, two granddaughters, Aria and Abri, her care giver Tori Smith and a sister, Sharon Springstead of Atchison, KS. She was preceded in death by her parents, her husband, a son, Tim and a granddaughter, Katelynd Galloway-Smith, a daughter-in-law, Carrie and five brothers.

Dorothy (Butler) Smith, 90, passed away peacefully May 3rd, surrounded by her family. Private graveside services will be at a later date in Pleasant View Cemetery in Carthage, SD. Dorothy was born on February 12th, 1930, in Atchison, KS,... View Obituary & Service Information

The family of Dorothy Dee Smith created this Life Tributes page to make it easy to share your memories.

Send flowers to the Smith family.